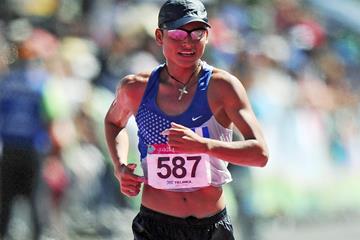 The road to the IAAF World Race Walking Team Championship Rome 2016 next month leads directly through Portugal as some of the world's top race walkers will tune up for their outing in the Italian capital by competing at the Grande Prémio Internacional de Rio Maior em Marcha Atlética 2016 on Saturday (9).

In the women’s 20km event at the penultimate IAAF Race Walking Challenge event before the championships, China’s Olympic silver medallist Qieyang Shenjie will be the favourite and is hoping to put behind her the disappointment of failing to finish here 12 months ago.

However, she will face competition from other great racers.

Brazil’s Erica de Sena, the South American record-holder with 1:28:22, was second in Rio Maior in 2014 and will also be looking to finally climb to the top of the podium.

She has started this season well with a third-place finish at the IAAF Race Walking Challenge event in Ciudad Juarez, Mexico, last month. She then finished second in Dudince and last weekend she took the victory at the South American Race Walking Championships.

Guatemala’s Mirna Ortiz, the NACAC record-holder, was two places behind de Sena in Dudince and second in Rio Maior in 2013.

From across the border, there will be a pair of elite Spanish race walkers on the start line: Julia Takacs, the 2014 Ibero-American champion, and the rapidly improving 20-year-old Laura Garcia-Caro, who was fourth at the 2014 IAAF World U20 Championship over 10,000m.

In addition, Lithuania’s Neringa Aidietyte, seventh in Dudince three weeks ago, will add the varied international flavour of the race.

Former winners in the women's race

Hosts Portugal will, as always, be well represented in the women's race.

Former winners Vera Santos, who took the honours in 2010 and 2014, and the popular veteran Susana Feitor, an eight-time winner in her home town, will get plenty of cheers.

Ana Cabecinha, fourth at the IAAF World Championship Beijing 2015, finished third in Dudince last month after recovering from an accident – she tumbled down some stairs – which led to her failing to finish at the Portuguese Championships.

Ines Henriques, now 35, had a good result when finishing second in Ciudad Juarez last month and is aiming to improve on her fifth place in Rio Maior last year

There is a strong South American presence in the men's 20km field.

Olympic silver medallist Erick Barrondo from Guatemala is the fastest man with a best of 1:18:25. After being disqualified on his two previous trips to Rio Maior, Barrondo’s first objective is just to finish the race, although his ambitions do run much higher.

He will face the likes of Mexico’s experienced 2009 world silver medallist Eder Sanchez as well as Ecuador’s in-form Andres Chocho, this year’s winner of the 50km in Ciudad Juarez and the 20km gold medallist at the South American Race Walking Championships.

Brazil’s 2014 Rio Maior winner Caio Bonfim, sixth in Beijing last summer and the silver medallist behind Chocho last weekend, is always competitive and towards the places on the podium while Argentina will be represented by Juan Manuel Cano, the 2015 South American champion.