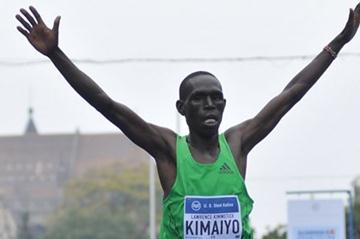 Can Kimaiyo and his fellow Kenyans capture the course record in Madrid?

No fewer than 15,000 runners will gather in the Spanish capital to take part in the 37th Rock ’n’ Roll Madrid Marathon, an IAAF Silver Label Road Race, on Sunday.

The altitude of Madrid, which is 695 metres above sea level, and the undulating profile of its course has meant that the course records remain at a relatively modest 2:10:37 and 2:32:04 - although Italy’s 2004 Olympic champion Stefano Baldini did run 2:09:59 on a different course at the one-off Madrid Millennium Marathon in 2001 - but the fields assembled for Sunday provide the prospect of some realistic revisions of these marks set by Kenya’s Francis Kiprop in 2013 and Turkey’s Mehtap Doğan-Sızmaz in 2009.

In the men’s race, there will be a crop of Kenyan representatives topped by Lawrence Kimaiyo.

The 23-year-old will be competing for the second time over the classic distance this year after being the runner-up in Mumbai on 19 January when he clocked 2:09:45.

It was still somewhat adrift of his lifetime best of 2:07:01, set in Kosice a couple of years ago, but it showed that he is in sub-2:10 shape.

Kimaiyo will be the fastest athlete on show on Sunday but the Kenyan contingent also includes Daniel Kiprop Limo, with a 2:08:39 time to his name, and Samson Bungei, who has run 2:08:36, but who will be running his third marathon in barely five months after successive outings of 2:10.45 in Valencia last November and 2:17:44 in Kinmen earlier this year.

Trying to deny a Kenyan win for the fifth successive year will be Ethiopia’s Teferi Wodajo.

The 32-year-old has a career best of 2:07:45 from Amsterdam back in 2009 but he did not break 2:11 in his three marathons last year and his form and fitness remains a big question mark.

A major surprise might be posted by Ezekiel Chebii, author of an impressive 59:05 half marathon when winning the 2012 Lille race.

The 23-year-old Kenyan has picked Madrid to make his full marathon debut and has recently shown good form with two second places in good quality half marathons in Den Haag and Lisbon last month, finishing second on both occasions when he clocked 1:00:56 and 1:00:50 respectively. Remarkably, he raced on those occasions with just one week.

Another in-form runner making his debut will be Eritrea’s Dawit Weldeselasie. Just 20, he managed a half marathon personal best of 1:01:54 earlier this month in Prague.

Ethiopia’s Abeba Gebremeskel Teklu seems to be the most consistent entrant in a slightly more modest women’s field on Sunday.

She ran a lifetime best of 2:30:18 in Warszawa for second last September and came not too far from that peak in Dubai earlier this year with a 2:31:10 performance to her credit.

Sandwiched between those efforts, the 25-year-old was successful in Firenze last November, which she won in 2:30:37.

Ethiopia will also be represented by Alem Fikre, who has a best of 2:30:13 from Rome last year, and Woldegebriel Teamo, who clocked 2:30:53 on her last outing over the distance, when winning in Cannes three years ago.

Morocco’s Malika Asahssah should also be regarded as a dangerous outsider.

The versatile 31-year-old has not tackled a marathon over the last two years but her 2:30:23 best from Hamburg in 2012 should put Asahssah in the fight for the places on the podium

The fastest athlete in the field will be Russia’s Alena Samokhvalova, thanks to a 2:28:43 time in Frankfurt 2011 although the 33-year-old has barely broken 2:40 in her three outings since then.

For the fifth time in a row, an additional 10km race will take place alongside the Marathon and Spain’s 2010 European 1500m champion Arturo Casado will start as the man to beat.

In addition, a Half Marathon event - where the evergreen Chema Martínez will be the main attraction - will be contested for the second time simultaneously to the Marathon and 10km races, leading to an overall figure of over 29,000 entrants on the day.

Weather forecasters predict a sunny day with temperatures ranging between 13 and 15 degrees Celsius during the event.