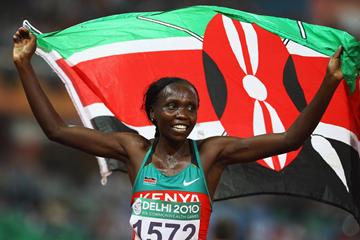 Kibet looking to make her mark on the roads in Saitama

Sylvia Kibet may not yet consider herself a full-fledged marathoner but the Kenyan looks likely to be in the running for a first title in just her second career race at the inaugural Saitama International Marathon, an IAAF Silver Label Road Race, on Sunday (15).

Kibet, the silver medallist in the 5000m at both the 2009 and 2011 IAAF World Championships, is among the group of invited runners that includes Ethiopian trio Meselech Melkamu, Tafa Askale and Atesede Baysa.

"I know the race is going to be tough, but I prepared well," the 31-year-old Kibet said as pre-race press conference on Friday. "My dream is to win this race, and I'm going to do my best."

Kibet made her marathon debut in April in Hamburg, where she placed second in 2:26:16; that came less than two months after she clocked a 1:09:32 half-marathon in Rome.

The race in Saitama, a city of 1.2 million about 30 kilometres north of Tokyo, was added to the international marathon calendar as a replacement for the Yokohama International Women's Marathon, which ended a six-year run last year as the nation moves away from elite-only single-sex races to mass participation events.

In fact, the Yokohama race itself had taken the place of the Tokyo Women's Marathon, which dated back to 1979 before being incorporated into the mass participation Tokyo Marathon, now part of the World Marathon Majors.

The fact that this is the first edition of the race, and the elite portion is limited to women, appeals to Baysa, who ran her career best of 2:22:03 when winning the 2012 Chicago Marathon.

"To be the winner of the first marathon means a lot," said Baysa, through an interpreter. "This marathon is women-0nly. Each athlete is different in their preparation, but have the same desire to win. I trained for this race, and I think I can win."

Used to the 'down and ups'

The Saitama race will start and end at Saitama Super Arena, the venue of the 2006 world basketball championships, and take the runners past Saitama Stadium 2002, one of the venues for football's 2002 World Cup.

The frequently undulating course features a maximum rise of 12 metres where it follows a railway overpass, and has a 10-metre incline just before the 30km mark.

"My impression of the course is that it's quite OK, because I have been training downs and ups," said Kibet. "There are a lot of hills in Kenya. I hope the race will be a bit competitive."

Melkamu was a late addition to the field earlier this week so it will be interesting to see how well prepared she is for Sunday’s race.

The 30-year-old won a silver medal in the 2009 world championships 10,000m and finished second in the Dubai Marathon last year. Her personal-best of 2:21:01, run when winning in Frankfurt in 2012, is the fastest among the foreign invitees.

For the Japanese runners, the race is the first of three domestic qualifiers for the two places remaining on Japan's team for the Rio 2016 Olympic Games.

Mai Ito has already clinched a spot after finishing seventh at the world championships this summer in Beijing.

From a competitive standpoint, it appears the best 0f the host nation have opted to skip Saitama, although that does not mean there are no interesting stories.

Most notable is the return of Remi Nakazato, once regarded as ‘the second Naoko Takahashi’ and a future hope, who missed six months training after undergoing surgery on her uterus. She returned to training in February.

"It's still less than a year since I've returned, so honestly speaking, I can't really say how I will do," said Nakazato, who finished 10th at the 2011 world championships.

"I have worked on building up my stamina and trained as always for a marathon," she added.

Nakazato, whose career best of 2:24:28 came in Nagoya in 2012, said she wants to repay all of the people who supported her through her tribulations. "That's why I'm running again.”

Making her comeback in Saitama is significant, as her father is a native of Saitama Prefecture. It was his encouragement that kept her going after she barely missed out on making Japan's team to the London Olympics.

"More than whether or not she would be ready in time, she wanted to enter (this race)," said Nakazato's coach, Tsutomu Takahashi. "Our goal is to become the top Japanese in the race."

The biggest name among the local contingent is Yoko Shibui, whose career-best of 2:19:41 makes her the second fastest Japanese runner ever.

But the fact that 14 years has passed since she ran that time in Berlin indicates that, at 36, she is not expected to be a factor in the race for a place on the podium.

As she prepares for her 20th career marathon, Shibui said she is not looking at it terms of a long-elusive Olympic berth.

"I've trained hard and I'm focused only on this race. I'm not really thinking about the future," said Shibui, who finished a heart-breaking fourth in her lone appearance at the world championships in 2001.

She said that she hopes to finish within 2:30, something she hasn't done in the past three years.