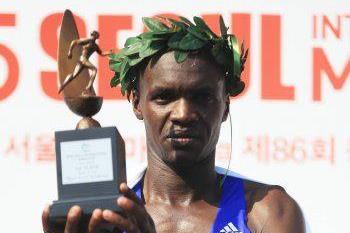 Course record the target at the Seoul International Marathon

The two Kenyans both talked up the possibilities of breaking Loyanae’s course record of 2:05:37, set when he won the first of his two titles in the Korean capital in 2012, at the traditional pre-event press conference on Friday.

"I want to establish a better record than the one that I have," said Loyanae, who has become a familiar face in Korea.

Also in the field is their countryman and 2013 Paris Marathon champion Peter Some, who is looking to bounce back after a poor outing in his last international race when he could onl;y come home a modest 10th at the Toronto Waterfront Marathon in October.

“Loyanae and Makau are the two men who deserve the attention but I could also be number one,” cautioned Some, whose best recent outings have been finishing fifth in the Tokyo Marathon in 2014 and 2015.

Leading the European challenge is Switzerland’s Tadesse Abraham who was 10th in this race last year and 19th at the IAAF World Championships Beijing 2016.

Abraham is normally a prolific racer but the 33-year-old has prepared specifically for this race since the start of the year and this will be his first outing of 2016.

In what has been designated a selection race for the Rio 2016 Olympic Games, the contest to be the first Korean home will be hard fought.

Yoo Seung-yeop was the first local runner home in 2015, in 14th place with a personal best of 2:13:10 to claim the Korean national title. After failing to finish in Beijing last summer, Yoo is targeted a top 10 place and a sub-2:10 time in order to redeem himself and clinch selection for Rio.

His biggest challenge could come from the man he beat by one place and 14 seconds 12 months ago, Shim Joung-Seub, who is also looking for a big improvement on his personal best of 2:13:28 in his only marathon to date.