The Zurich Maraton de Sevilla, once again an IAAF Bronze Label Road Race, will take place on Sunday (22) boasting one of the flattest circuits worldwide, with barely 10 metres of difference in altitude between the highest and lowest points.

While last year’s race witnessed the surprise victory of Kenya’s Cosmas Kiplimo Lagat, who was signed up as a pacemaker and finally reached the tape unopposed in a course record of 2:08:33, the young Kenyan won’t be in contention on this occasion as he got injured some months ago and was not in the kind of form necessary to match last year’s success.

The women’s section is topped by the in-form Ethiopian Tigist Tufa, a consistent specialist who set no fewer than three PBs last year, topped by an impressive 2:21:52 clocking in Shanghai in November; her previous efforts being 2:28:04 in Santa Monica and 2:24:31in Ottawa.

The Ethiopian’s stiffest rivalry might come from her compatriot Martha Markos Ayele (2:30:24), who has a PB of 2:30:24 from 2011 and more recently won on Spanish soil at the 2013 Castellon Marathon.

Portugal’s Filomena Costa was timed at 2:31:08 at the Hamburg Marathon last year when she finished sixth. On her recent form, Costa clocked 1:12:46 at the Viana do Castelho Half Marathon as part of her build-up for Sunday’s race. The Portuguese runner will turn 30 on the day of the race and would be delighted to reward herself with a sub-2:30 PB.

Kenya-Ethiopia battle on the cards in men’s race

Trying to succeed Kiplimo as ‘king of Seville’ will be a large African armada headed by Kenya’s Jafred Kipchumba, holder of an impressive 2:05:48 personal best set when he won in Eindhoven back in 2011. Reportedly, the 31-year-old is approaching Sunday’s event as his biggest target this year.

He will be in the company of his compatriots Daniel Too Kiprugut, who has a PD of 2:08:29 and finished a creditable third in Reims last year, former Madrid Marathon winner Patrick Korir who should be eager to improve on his 2:09:36 career best, 2:10:33 performer Cosmas Kemboi, plus two debutants in the guise of Lawrence Cherono and Kipkorir Bomo, who have respective half-marathon PBs of 1:01:35 and 1:01:48.

The Ethiopian squad will be compounded by former world junior steeplechase finalist Afewerk Mesfin, holder of a PB of 2:09:49, Alebachew Debas (2:10:06) and Tesfaye Hailegiorgis (2:11:10).

But the toughest Ethiopian opponent for the Kenyans well might be Moges Kasaye, owner of a 1:00:20 PB for the half marathon.

A question mark hangs over Eritrea’s 2005 world half-marathon bronze medallist Yonas Kifle as this will be his first race since pulling out of the marathon at the 2013 IAAF World Championships.

The first record of the event came one month ago with a sold-out 11,500 entries from no fewer than 58 countries. 18% of the runners come from overseas and 9% are women.

The marathon will take place across well-known monuments such as ‘La Giralda’, one of the largest cathedrals in the world, ‘La Real Maestranza’ bullring or ‘La Torre del Oro’, while the finish line will be placed inside La Cartuja stadium, venue of the 1999 IAAF World Championships.

Spain’s former world champions Martin Fiz and Abel Anton will also be on show. While the latter has no particular ambitions, Fiz, who will turn 52 in March, will be aiming for a sub-2:30 time.

While the summer heat in the city is usually unbearable, the weather at this stage of the year should be nearly ideal for endurance efforts. Weather forecasters predict a sunny day with a temperature between 11-13C by the time of the event.

BACK
Pages related to this articleAthletes
Tigist Tufa 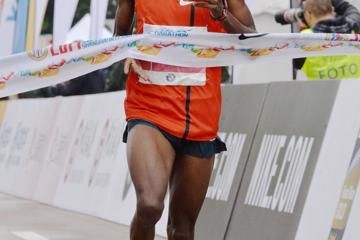