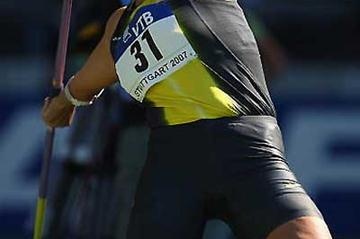 The Josef Odlozil Memorial is one of a select group of Area meetings at which points can be acquired by athletes to qualify for the IAAF / VTB Bank World Athletics Final, to be held on 13-14 September in Stuttgart, Germany.

Spotakova arrives in the Czech capital on the heels of her defeat in Ostrava, where she was outdistanced by Germany’s Christina Obergföll.

The men’s hammer is already a tradition at this meet and this year two Osaka medallists - Primoz Kozmus of Slovenia and Libor Charfreitag of Slovakia – along with world leader Krisztian Pars of Hungary and European medallist Vadim Devyatovskiy of Belarus are the top names.

After his 300m outing in Ostrava, World and Olympic Decathlon champion Roman Sebrle will test himself in the Shot Put before competing in the Decathlon in Kladno on Wednesday and Thursday. The main name in this event is European Champion Ralf Bartels of Germany.

In the memorial race at 1500m (Josef Odlozil was the 1964 Olympic silver medallist in Tokyo), Briton Nick McCormick and returning Kenyan Cornelius Chirchir are the main runners to watch.

There is a strong German presence in the men’s Pole Vault with Tim Lobinger, Lars Borgeling and Alexander Straub. The High Jump will have on the men’s side home stars Tomas Janku and Svatoslav Ton clashing with 2005 World champion Yuri Krimarenko of Ukraine, while the women’s event features top Ukrainian Vita Styopina against Swede Emma Green, Iva Strakova and Nicole Forrester of Canada.

Brian Dzingai of Zimbabwe, who was second behind Usain Bolt in excellent 20.17 in Ostrava, is the main name for 200m. In the 100m experienced Uchenna Emedolu of Nigeria and Briton Simeon Williamson are the ones to watch. The women’s 200m will see South Africans Tsholofelo  Thipe, Melissa Le Roux, and Estie Wittstock against African Games winner Vida Anim of Ghana.

Alfons Juck for the IAAF