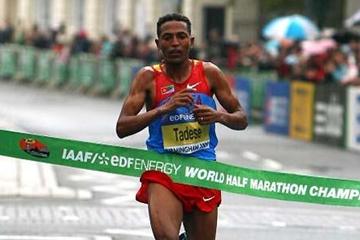 Another great field has been assembled for the EDP Lisbon Half Marathon which on Sunday celebrates its 20th anniversary.

The target for organisers of this IAAF Gold Label Road Race is the World record in the Half Marathon, sweetened by a 50,000 EUR World record bonus. As has been done in the previous two editions, the runners will follow a modified record standard course with the start at sea level.

Leading the charge will be Zersenay Tadese of Eritrea, the four-time World Half Marathon champion and 2009 World silver medalist at 10,000m. The 28-year-old has asked organizers to provide pacesetters to target the 58:33 World record set by Samuel Wanjiru in 2007. Tadese has a career bet of 58:59 from 2007.

Joining Tadese will be Jaouad Gharib of Morocco the two-time World champion in the Marathon and reigning Olympic silver medallist over the longer distance. Gharib, who has a 59:59 personal best, is a regular presence at the race and has collected five top-10 finishes including last year’s runner-up showing.

Ethiopian Melese Asfaw (1:02:35), winner of 2008 and 2009 Shanghai Marathon, could be a factor as well, along with his compatriot Ibrahim Jeilan, a former World Youth and Junior medallist who is still just 20.

Leading Europeans in the field include Spaniard “Chema” Martinez, the 2002 European champion in the 10,000m and runner-up at the continental championships in 2006; Russian Yuri Abramov (1:02:50), who was third at last year’s Houston Marathon.

Dita vs. Ndereba in the women’s race

In the women’s field, the focus will be on Romanian Constantina Dita, the 2008 Olympic Marathon champion who has a 1:08:07 PB, and Catherine Ndereba (1:07:53) of Kenya, the two-time Olympic silver medallist in the Marathon.

Local eyes will focus on former Olympic, World and European champion Fernanda Ribeiro (1:08:23), and Monica Rosa (1:13:09) who will be looking to improve from her sixth place finish here last year.

The women’s field is not as deep as the men’s but the weather forecast promises good conditions for everyone. Temperatures of 15 C maximum (12 C min) are expected, with light winds and a 30 percent chance of rain.

This race, which boasts a total of 35,000 runners (6000 in the Half Marathon), crosses the Tagus River over the popular 25th of April Bridge.