Tokyo expects to host fastest Marathon ever seen in Japan

The 2013 Tokyo Marathon, an IAAF Gold Label Road Race, is scheduled to be held on Sunday (24) and will witness the best field ever assembled in the Japanese capital.

Now part of the World Marathon Majors series, the seventh edition of the race sees Dennis Kimetto, 25km World record-holder (1:11:18), start as favourite. In his only Marathon to date, the 2012 Berlin Marathon, Kimetto not only ran the fastest debut on a standard course (2:04:16), but he also became the fifth-fastest Marathon runner ever.

James Kwambai has run three sub-2:06 Marathons in his career. One more would see him tie with Patrick Makau and Tsegaye Kebede, while only Haile Gebrselassie and Geoffrey Mutai are ahead of him.

"I trained from December to last week for this race," said Kwambai. "I am in the best shape."

So far, nobody has won the Tokyo Marathon more than once, but defending champion Mike Kipyego has a chance to break new ground.

For Japanese athletes, the race will double as the qualifying race for the 2013 World Championships and thus the race for the first Japanese will be fierce. After Arata Fujiwara’s last-minute drop out, the fastest Japanese in the field is now Kazuhiro Maeda with 2:08:38 recorded at the last year’s race.

"My form is improving, so I want to run 2:07," said Maeda at the press conference.

However, the most intriguing Japanese in the field is debutante Yuki Sato, the fastest active 10,000m runner in Japan (27:38.25), who could be on course to challenge the fastest Marathon debut time by a Japanese runner (2:08:12).

"I am going to run many more marathons in the future, so this race is to find out what the marathon is all about," said Sato.

Masato Imai, also known as 'mountain god' because he is an extremely good hill runner, was getting a lot of media attention at the press conference. "I may need to think about the World Championships qualifying time, but if I stay aggressive to the end, then the good time will follow," he said.

Battle of Ethiopians in women’s race

The women’s race is likely to be between Bezunesh Bekele and Aberu Kebede, both of whom boast identical PBs of 2:20:30.

Bekele’s best was set at last year’s Dubai Marathon, where she finished fourth. One year prior she finished in the same position at the World Championships in Daegu, just missing out on a medal.

Kebede set her lifetime best when winning last year’s Berlin Marathon, regaining her title from 2010. She finished one place and three seconds behind Bekele in Dubai last year, so will have plenty of motivation to get the better of her Ethiopian team-mate in Tokyo.

For 40-year-old Irina Mikitenko, the world masters W40 record of 2:25:43 by Lyudmila Petrova is well within her reach. One month after turning 39, the German clocked 2:22:18, while last year she finished seventh at the London Marathon with 2:24:53.

"People always ask me about the age," said Mikitenko at the press conference, "but I feel no different from when I was in my twenties."

Also entered is Kenya’s Caroline Kilel, who set her lifetime best of 2:22:36 when winning the 2011 Boston Marathon, and Ukraine’s Olena Shurkhno, who set a national record of 2:23:32 to finish third in Berlin last year.

Since Tokyo Marathon is not a World Championships qualifying race for Japanese women, the best domestic women have skipped this race. The only exception is Yoshimi Ozaki, the 2009 World silver medallist. Ozaki has decided to go into semi-retirement, so she is not interested in running in Moscow.

"Most of the races I've done in my career are qualifying races for Olympics or World Championships," said Ozaki. "But now I can run Marathons without that pressure. And as my form has improved with training, Ifeel that I can fight it out for a win." 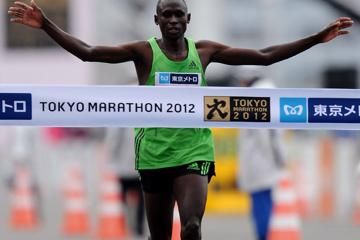 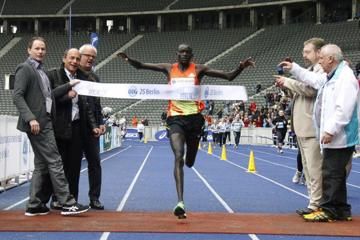