James, Rollins and quality hammer clash are the expected highlights in Tokyo

For the second time in three races to start the new season, Grenada’s Olympic 400m champion Kirani James will be running the 200m when he takes the track at the Seiko Golden Grand Prix, an IAAF World Challenge meeting, in Tokyo on Sunday (11).

In the Hammer Challenge, competitors are ranked based on the aggregate total of their three best performances during the season. A total of $207,500 in prize money is available for the top 12 finishers, with the winner taking home $30,000.

Despite his forays into the 200m, James is not preparing to make some future run at fellow Caribbean star Usain Bolt in the half-lap event. He just wants to have some fun in a non-Olympic and World Championships year.

"My main event is always the 400m, and I think it will be for a long time," James said after arriving in Tokyo. "But I also like the 200m too, and I want to have some fun this year. I'm just happy that I have an opportunity to actually do it on a competitive level."

James' first-ever race in Japan will come in a meeting that will be the last in the long history of the National Stadium, the venue for the 1964 Olympics and 1991 IAAF World Championships. The stadium will be rebuilt for the 2020 Tokyo Olympics.

James made history for his country when, at 18, he won the world title in Daegu in 2011, then followed that up with the Olympic gold in London a year later. But he showed he could have a bad day just like everyone else at last year's World Championships in Moscow, when he ran out of gas in the final and finished seventh. But he is not one to dwell on the defeat.

"That was out of my head since after the race," he said. "I just had a bad race, and I just had to accept the situation for what it is and move on."

The 21-year-old James opened this season by running the 200m at the UTEP Invitational on 12 April in El Paso, Texas, where he clocked 20.64, running into a -2.7m/s headwind. He followed that by placing second to rival LaShawn Merritt in the 400m at the Drake Relays in Des Moines, Iowa.

Despite his credentials, which includes a 200m-400m double at the 2009 IAAF World Youth Championships, James could hardly be considered an overwhelming favourite in the 200m on Sunday. His personal best of 20.41 is tied for fifth best out of the eight entries, including trailing Japan's 2010 world junior champion Shota Iizuka (20.21), and Asian Games bronze medallist Kei Takase (20.34).

The race should probably be seen more as a warm-up as James prepares to continue his rivalry in the IAAF Diamond League with LaShawn Merritt, who won the gold in Moscow, as well as a planned appearance at the Commonwealth Games. He sees the current high level of competition in the 400m as making that event a focal point in the sport.

"When you have competition like that – not just me and LaShawn, but if you plug in [Luguelin] Santos, Tony McQuay, the guy from Saudi Arabia [Youssef Al-Masrahi] – it makes the event more fun. On the whole, it makes the sport more fun. We have the chance to make our event the most competitive, the most exciting, the most intriguing event for the next three, four years. As long as we can stay consistent, stay serious, stay competitive, I think it's going to be a very great event to watch and very interesting."

Simpson has brought renewed interest to middle-distance events in the US with her emergence as a global star. The former steeplechaser, who added a silver medal in the 1500m in Moscow, will be challenged in her season-opener by 2012 world junior bronze medallist Senbere Teferi of Ethiopia and NCAA champion Emma Coburn of the US.

“I’m really healthy and I’ve been training as well as ever,” Simpson said. “I’m just excited to be here. I’ve been here in Tokyo several times before, but never to race.”

That’s not entirely true. Simpson raced here before, just not the type of competition that counts in the record books. She has appeared twice as a guest on a Japanese TV show in which individual sports stars are pitted against teams of either students or celebrities in relay races. In Simpson's case, she ran a full 1500m against a squad of comedians. She won both times.

“It was really wild and kind of crazy, but it was really fun,” she said. “I enjoyed it and I always have great experiences here, so that’s why it was like, I need to race here.”

Gatlin, whose last race in Japan was at the Grand Prix meeting in Osaka in 2006, has also been a featured performer on a Japanese TV show. In November 2011, Gatlin ran the mother of all wind-aided races, clocking 9.45 in the 100m with the help of a giant industrial fan pumping out a 20m/s wind.

“The people from the television show wanted to break the world record (Bolt’s 9.58) and see under what conditions the world record could be broken,” said Gatlin, who was paid 2 million yen (about $20,000). “So they had a big fan, like on a fan boat that you would find in the swamps. It was the biggest fan that I’ve ever seen in my life.

There will be electricity flowing for the race, and not just because of the presence of Gatlin, the 2004 Olympic champion who won the bronze in London and finished second to Bolt in Moscow. Rising Japanese star Yoshihide Kiryu will be making his latest attempt to become the host nation's first sprinter to break 10 seconds.

Last month, the 18-year-old Kiryu clocked 10.10 in his qualifying heat at the Oda Memorial Meet in Hiroshima, although he felt a twinge in his right hamstring and withdrew from the final. It was his fastest time since gaining global attention by running 10.01 at the same meeting a year ago, putting him second on the all-time Japanese list behind the 10.00 set by Koji Ito in 1998.

Gatlin, who ran 10.11 into a -1.9m/s headwind in his season-opening race last week in Kingston, liked the prospect of leading Kiryu into the sub-10 club.

“That would be really good for both of us,” he said. 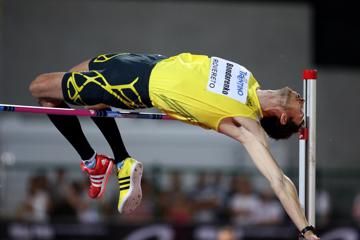 Bondarenko to open season in Tokyo...