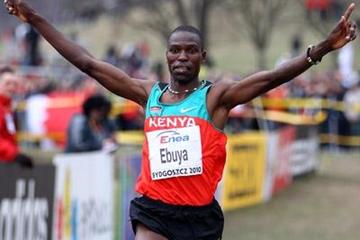 The race to the 2013 IAAF World Cross Country Championships enters its final lap this Saturday (16) when Kenya holds the KCB Nairobi Cross, an IAAF Cross Country Permit meeting, which doubles as the selection event for the March 24 global showpiece.

Among the 396 listed starters, with a dozen overseas athletes from six nations invited, Kenya will be seeking to select a squad of 24 to fly the flag in Bydgoszcz with memories from their last showing there in 2010 acting as inspiration.

On that occasion the country completed an unprecedented sweep of all eight individual and team titles on offer to stamp their supremacy in cross-country running.

A year later in Punta Umbria, Kenya ceded the individual senior men’s individual and junior women’s team crowns to bitter rivals Ethiopia and the stated target is to recoup what was lost in Spain as well as retaining what was won.

Vivian Cheruiyot and Geoffrey Kipsang, who powered to the senior women’s and junior men’s gold medals respectively at the 2011 World Cross, will not return to defend their titles having withdrawn from the trials to prepare for the Moscow World Championships and pursue Ras Al Khaimah Half Marathon honours in that order.

The first four finishers across the line will be guaranteed of places in the Kenyan team for the World Cross. A panel of selectors will then decide which two other athletes in each category will be added to the squad.

Thereafter, the team will move to the Kigari Teachers Training College in Embu (200km from Nairobi) for a one-month training camp before departing for Poland on March 20.

Having surrendered the Holy Grail of cross-country running to Ethiopia’s Imane Merga, special emphasis has been placed on selecting six Kenyan runners capable of wresting the crown back from the archenemies’ camp.

“This is one title that keeps on eluding us, and this year the selectors will be keen on having a line-up that can bring it back home since it is the biggest prize at the World Cross,” said Athletics Kenya general secretary David Okeyo.

Having missed Punta Umbria due to injury, 2010 champion Joseph Ebuya, who was fourth at the Kenya Defence Forces (KDF) Championships, returns seeking to reclaim the crown.

“I want to be like other KDF runners like John Ngugi and Paul Tergat who won the World Cross many times,” he said. “It will not be easy now since it comes once every two years but I’m ready.”

And the omens are good: “When I won in 2010, I finished fourth here at the Forces and I hope this will happen again.”

Vincent Chepkok, who won bronze as a junior in Mombasa and as a senior in Punta Umbria, will join Ebuya in the KDF team, alongside Leonard Oloitiptip who won at their selection event.

Peter Matelong – who has sizzled in the domestic cross circuit series, winning in Nyahururu and Embu – as well as Mark Kiptoo, Kenya’s captain at the 2009 World Cross, are other defence runners seeking six available places in the national side.

Rivals Kenya Police have been hit with high-profile withdraws including Kipsang and Geoffrey Mutai, the fifth-place finisher in Punta Umbria. But they still have great quality in their ranks, among them 2008 junior bronze winner Lucas Rotich and World indoor 5000m junior record-holder Isiah Koech.

The 2011 African cross champion, John Mwangangi, and Timothy Kiptoo lead the line for Prisons. Outside the disciplined forces, defending national champion and London Olympic 10,000m runner Bidan Karoki has pledged to lead a plethora keen to upset the cart.

Attention will also be fixed on whether Hosea Macharinyang can bag a country record eighth World Cross appearance by nailing one of the six slots, having won the domestic series jackpot to underline his potential.

With Vivian Cheruiyot and eternal World Cross bridesmaid Linet Masai out of the running, the complexion of this squad will be altered.

However, the resurgence of Emily Chebet, the 2010 World cross-country champion who won four out of four races she started at the KCB/AK National Cross Country Series, has created the buzz around this event.

“My dream is to return to Poland and once again become a World champion, but the first target is to make the Kenyan team,” said the Bydgoszcz champion.

Lineth Chepkirui, who has four World Cross appearances under her belt, has recovered from the injury that saw her miss out last year and has now regained the kind of form that took her to Edinburgh, Amman, Bydgoszcz and Punta Umbria.

Mercy Cherono, the 2010 World Cross junior winner now competing in Police colours, is keen to crown her step up by returning to Poland with the emerging talent being fronted by African champion Joyce Chepkirui and Gladys Cherono, who won the 10000m/5000m double at the African Championships last year.

With most of established names in this class now seniors, a bustling crop of new talent are out to cement their names by making the squad.

Moses Mukono, a training mate of 800m World record-holder David Rudisha, and Kiprono Bett, who won the series title during the domestic cross series, are the front runners.

Mukono racked up three victories in the local series, as did Bett who is a younger brother of the 2008 World junior 10,000m champion Josphat.

Defending World junior cross-country champion Faith Chepngetich Kipyegon has emerged as one of the finest runners of her generation, but after enjoying three unchallenged seasons at the helm, her might will face its sternest test yet.

Leading the charge is emerging starlet Roseline Chepngetich, who bagged the top honours in the local series, as well as Agnes Chebet who placed on the podium in four of the seven events that made up the domestic circuit.

Fellow World junior champion Mercy Chebwogen is also one of the favourites.