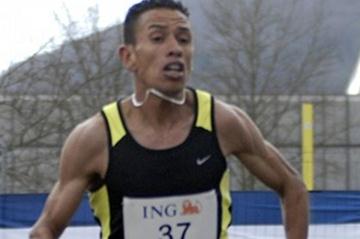 Morocco’s defending champion Elabassi El Hassan will be back for the ING Eurocross in Diekirch, Luxemburg, on Sunday (12), the ninth IAAF Cross Country Permit meeting of the season.

A year ago three Moroccans were entered in the event and they took the first three places to produce a surprise clean sweep. However this year’s opposition will most likely be stronger. In the women’s race Ethiopia’s Almensh Belete will compete in Diekirch once again, hoping to win for the first time in her fourth attempt.

In 2011 the three Moroccan runners dominated the Eurocross more or less from the start. Two of those three will compete again on the 10.2km course, which is more challenging due to the very cold weather. “The course is frozen and at present we have three centimetres of snow on it,” said Antoine Moureaud, the organiser of the event.

El Hassan, who improved his Half Marathon best to 1:01:13 last year when he took third in Luxemburg’s Route du Vin race, will be returning with Najim El Qady. He was third in 2011 and then went on to win the Brussells 20km race later in the year. El Hassan and El Qady will be accompanied to Diekirch by fellow-countrymen Khaled El Amri and Hamid Denguir.

While El Hassan targets a second straight victory there is a runner in the field who’ll be going for No. 4: Onesphore Nkunzimana of Burundi who is the record winner of the Eurocross. His first two wins in Diekirch came under a different name though. In 2005 and 2007 he was competing for Qatar as Sultan Zaman Khamis. He then won again in 2010, but was unlucky a year ago. In the first part of the race Nkunzimana tried to hold on to the Moroccans, but he soon lost contact and later dropped out due to a muscle problem.

But it could well be a youngster, who will produce the headlines on Sunday: 18 year-old Japheth Korir. At a very young age he achieved remarkable results at the World Junior Cross Country Championships. In 2009 he placed fifth in Amman, Jordan, and a year later he took the bronze medal in Bydgoszcz, Poland. In 2011 Korir was Africa’s junior Cross Country champion and the fastest junior in the world at 3000m (7:40.93). This season he was second in the junior race of the Eldoret Cross Country event.

Fellow-Kenyans Albert Rop (3000m PB of 7:35.66, sixth place at 5000m in 2011 Brussels Samsung Diamond League Meeting) and Peter Wanjiru as well as the Ethiopians Tasama Dame and Taye Damte are also expected to do well on Sunday.

Women’s Race: Can Hahn produce another surprise in Diekirch?

Almensh Belete has been on the podium in Diekirch twice. On Sunday the Ethiopian wants to be on the very top for the first time. The 22-year-old took second in 2009, when she finished behind her sister Mimi, and again in 2010. She also competed last year but had to settle for fourth. Two more recent results suggest that she could be ready for her first Eurocross title. She was third in the Brussels Cross Country in December and then took the New Year’s Eve Race in Trier, Germany.

On Diekirch’s 5.35km course Belete’s toughest rival could be fellow countrywoman Etenesh Diro, who has a Half Marathon best of 1:11:35 and has 9:49.18 credentials in the Steeplechase. While Morocco’s Fatiha Benchatki features a strong 10km personal best of 31:25, a European challenge could come from Susanne Hahn of Germany who has done very well in a number of international Cross Country races in recent years. And she is the only runner in the Diekirch field who has won the event in the past, collecting the victory six years ago. After a break from competition after giving birth she has returned with some fine results in 2011. Simret Restle is another German who has done well in Diekirch. She took second a year ago.