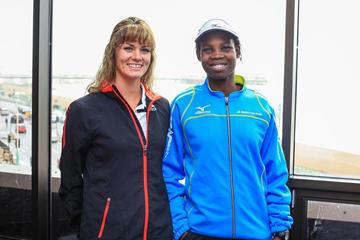 Uganda's Inzikuru leaves the barriers behind with marathon debut in Brighton

The fourth running of the Brighton Marathon, an IAAF Bronze Label Road Race, takes place on Sunday (14) and features an intriguing debutante in the shape of Uganda’s 2005 World Steeplechase champion Docus Inzikuru.

Now guided by the renowned Italian coach Renato Canova, she has decided to switch to the Marathon, but only temporarily since she has not given up all aspirations to further track medals.

“I have changed my preparation for the Marathon, and after then I shall prepare for the Steeplechase at the World Championships in Moscow,” said Inzikuru.

She ran the Steeplechase at the London 2012 Olympics Games but failed to get through to the final, “because I did not have enough preparation.”

One of the main changes to her regime is that her long runs have progressed from 25km to 48km, usually on Sundays, with two track sessions a week which are typically a gruelling set of 10x2000m repetitions done at altitude.

Although she hails from Uganda, Inzikuru spends most of her time away from her family, husband and five-year-old daughter. “Mostly I train in Iten in Kenya, it is too warm in Uganda. It is 25 or 26 degrees Celsius so it's no good for training for distance running, so mostly my entire life is in Kenya,” she reflected.

Back in Uganda, it is her husband who takes care of her daughter but occasionally he is also in Iten helping her train by following her in a car and supplying Inzikuru with water. On those occasions, it falls to one of her six sisters to look after her child.

Inzikuru is ready to be competitive on Sunday where she will come up against the US 2:32:55 performer, Emily Harrison, the fastest woman in the race.

However, Inzikuru has an additional goal in mind.

“I shall be very grateful if I break the Ugandan record (2:40:31), we don’t have strong marathon runners in Uganda.”

Harrison hails from Virginia but currently trains in Flagstaff, Arizona. “I am in good shape and we will see what happens," she said. "I think 1:17 would be a great halfway split for me. I tend to run better if I can do a negative split. My 2:32 came on a very conservative first half and then I cut it down on the second half which leads me to believe that I have more room to improve.”

Apart from Marathon running, Harrison is also an ultra exponent. After finishing second in last November’s JFK 50 miler, she has been invited to a 100 Mile event in California.

“That is in June so after this I will be transitioning to some longer endurance training,” added Harrison.

Expected to be battling for the Brighton title is former course record-holder from Sunderland, Alyson Dixon, who set her personal best of 2:34:51 when she won in Brighton two years ago, and Kenya’s Eunice Kales.

Like Inzikuru, Kales is making her Marathon debut but has run under 70 minutes for the Half Marathon, albeit in 2010, and she has a good cross country pedigree as well, including finishing second at the famous Cinque Mulini IAAF Cross Country Permit race in Italy two months ago.

There are also four other Kenyans who have run under 2:11 in the line-up, as well as Ethiopia’s 2:10:17 performer Gela Hailu.

14,500 runners have registered for Sunday with around 10,000 expected on the start line. For the elites there is a new start which misses out the first hill so organisers are looking for fast times.

The course record stands at 2:12:03 by Kenya’s Peter Some from last year while Belarus’s Sviatlana Kouhan was timed at 2:29:27 in 2012 for the women’s record. However, both marks - particularly the men’s record - will be under threat on Sunday.