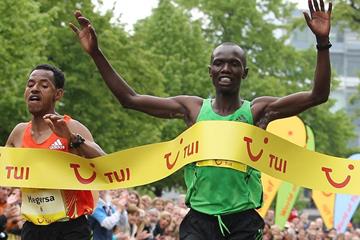 Kiptum and Tilahun the favourites in Venice

Kenya’s Joseph Kiprono Kiptum starts as the favourite of the Venice Marathon, an IAAF Silver Label Road Race on Sunday (26).

The 27-year-old is a former winner of the Hannover Marathon and has a PB of 2:09:56, making him the fastest man on the start-list. He has not contested a marathon this year, but clocked 1:01:10 over half the distance earlier in the year.

The Kenyan contingent will be also represented by Elijah Tirop, whose PB of 2:12:07 was set in Brighton last year, and Donald Kiplagat, while Samuel Ndiritu and Francis Waithaka will be making their marathon debuts.

Also making their debuts will be Ethiopia’s Behailu Mamo Ketema and Rwanda’s Jean Baptiste Simukeka. Based on his half-marathon PB of 1:00:53, Ketema could be something of an underdog. Simukeka’s half-marathon season’s best of 1:03:28 is just three seconds slower than Ketema’s.

Uganda’s Simon Rugut will be looking for more success on Italian soil, having triumphed at the Treviso Marathon earlier this year in a PB of 2:16:32.

Ethiopia’s Konjit Tilahun starts as the favourite in the women’s race. The 27-year-old improved her marathon PB to 2:28:11 earlier this year in Dubai and will be looking for the first marathon victory of her career.

Monica Carlin, who finished second at the Ultramarathon World Championships and fourth at the 2012 Venice Marathon, is the best Italian runner in the field. At 2:44:44, her PB is a fair bit slower than Tilahun’s, but the experienced 43-year-old has eight marathon victories to her name.

More than 6000 runners will take part in the 29th edition of the Venice Marathon, which starts on Sunday morning from Villa Pisani in Stra, a small town about 25km from Venice, to Riva Sette Martiri in the historic centre of Venice, in a scenic position facing the lagoon.

The first part of the course covers an area steeped in history, culture and beautiful landscapes, going through the centre of Marghera before entering St Giuliano’s Park. Runners will cross the 4km Liberty Bridge which links Mestre to Venice before reaching the port area in the city centre for the last few kilometres.

Runners will face 14 bridges in the final three kilometres before passing by Piazza San Marco and Palazzo Ducale. The course passes through Piazza San Marco before reaching Riva dei sette Martiri where the finish-line is located.

The Venice Marathon joins the new project created by the Italian Athletics Federation which unites the four big Italian marathons in the Italian Art Cities Venice, Florence, Rome and Turin.