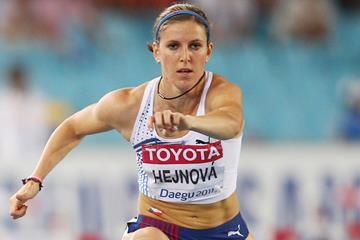 Few athletes in the world this year have been as dominant as Zuzana Hejnova.

The Czech 400m hurdler heads to Moscow having won all of her races this season in her specialist event. After her first two IAAF Diamond League victories, in which she broke 54 seconds in Shanghai and Eugene, it looked as though the 26-year-old may have peaked too early in the season.

However, as the season went on, it became clear that Hejnova was simply in incredible form. If anything, she has been getting quicker in her last few races leading up to the IAAF World Championships.

She set a season’s best of 53.60 to win in Oslo, then followed it with 53.32 in Ostrava. She then improved her own national record to 53.23 when winning in Paris before clocking a world-leading time of 53.07 in London, her final race before Moscow, to also clinch the Diamond Race with two races still to go.

Nevertheless, the London 2012 Olympic Games bronze medallist knows she can’t take anything for granted. Hejnova went to the 2011 World Championships with the second-fastest time in the world, but finished outside the medals.

Hejnova’s task will be made slightly easier by the fact that Kori Carter, the fastest US woman this year with a best of 53.21, will not be in Moscow. She withdrew from the US Championships before the semifinals but had already considered missing the World Championships as her sister’s wedding is being held that same week.

USA will still send four women in the event though, as the 2011 World Championships winner Lashinda Demus has a wildcard entry, but the defending champion is just 10th fastest of the entrants for Moscow.

Demus’s training partners Dalilah Mohammad and Christine Spence both qualified for the US team, as did 2012 Olympic finalist Georganne Moline.

Behind Hejnova, the second-fastest entrant is Great Britain’s Perri Shakes-Drayton.

The European indoor 400m champion set a personal best of 53.67 when finishing second to Hejnova at the Diamond League meeting in London and will be keen to make amends for last year when hamstring problems prevented her from making the Olympic final.

Shakes-Drayton’s team-mate Eilidh Child has also been in her best form this year. Her 54.22 from Birminghan makes her the fifth-fastest woman on the entry list.

Russia’s Olympic champion Natalya Antyukh has raced just twice over the barriers this year, her best result being her 55.20 in the heats at the Russian championships last month, but the sixth-fastest woman in history will have the home crowd’s support, as will compatriot and 2012 European champion Irina Davydova.

At various past major championships, Hejnova’s Czech team-mate Denisa Rosolova has contested the Long Jump, 400m, 60m Hurdles and Pentathlon. This year, the 2012 European silver medallist will compete in the 400m Hurdles for the first time at a World Championships, looking to improve on her seventh place from last year’s Olympic Games.

Jamaica will send four athletes for this event as 2012 Diamond Race winner Kaliese Spencer gets a wildcard entry. Team-mate Ristananna Tracey is the fastest Jamaican this year with a season’s best of 54.52.