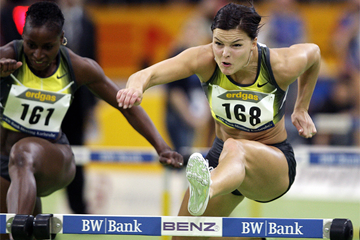 The Combined Events and Men's competitions are analysed in separate previews.

NB. Official Start Lists will only become available after the Technical meeting which takes place at 16:00hrs on Thursday 6 March, therefore previews are correct as of date of writing (3 March).

60m: Angela Williams hopes to finally land her first elusive 60m title after winning silver medals at the 2001 and 2003 World Indoor Championships. The 28-year-old US sprinter appears to be rounding into form at the right time and her 7.11 performance, the third fastest in the world this year, to win her national title in Boston suggests the gold medal could be within her grasp.

However, Williams faces strong opposition form the joint leaders on the World Lists - Nigeria’s Ene Franca Idoko and Russia’s Yevgeniya Polyakova.
Idoko, 22, sped to 7.09 to win in Chemnitz last week and has elevated herself into the medal picture. Meanwhile, Polyakova, ran the same time to win the Russian Championships, although she has struggled to replicate that time in subsequent races.

Watch out too for Belgium’s Kim Gevaert, who has outstanding credentials on the boards having won three European Indoor 60m gold medals and a silver medal at the 2004 World Indoor Championships in Budapest. Gevaert ran well in her one appearance of the indoor season in Birmingham, only losing out on the victory in a photo-finish after posting the same time – 7.15 – as Williams.

400m: Russia will be confident of landing a fourth successive World Indoor 400m title as they boast the fastest two women in the field. Olesya Zykina has rolled back the years during this indoor season and leads the World Lists after her 51.09 clocking to take the Russian title and followed this up victory in the European Indoor Cup in Moscow.

Her countrywoman, Natalya Nazarova, had to play second fiddle to Zykina at the national championships but with a season’s best of 51.45 she cannot be dismissed in her history-breaking quest to become the first woman to land three World Indoor 400m titles. Quickest of the non-Russian athletes this winter is Nigeria’s 2007 World Championship semi-finalist Christy Ekpukhon Ihunaegbo, who set a new personal of 51.75 in Chemnitz.

Another possible medal contender Ilona Usovich of Belarus, the European Indoor 400m silver medallist, has raced sparingly over the two-lap distance this winter (51.80 best) and has decided just to contend the relay.

800m: Maria Mutola, the most decorated athlete in the history of the competition, seeks a remarkable eighth World Indoor 800m title in Valencia. The 35-year-old living legend from Mozambique athlete, who plans to finally hang up his spikes at the end of the year, is unbeaten in three competitions this year and recorded a season’s best 1:59.48 in Karlsruhe.

The fastest in the field is, however, Natalya Ignatova, who clocked 1:58.84 to take the silver medal behind Yelena Soboleva at the Russian Championships. The previously unheralded Ignatova had never dipped below 2:00 until this indoor season and also featured in the 4x800m team which shattered the world record at the Russian Championships. Another of that world record-breaking quartet, Mariya Savinova (1:59.46) is also entered, as is 2003 World Indoor bronze medallist Mayte Martinez of Spain, who set a season’s best of 2:00.68 to finish third behind Mutola in Stockholm in her last outing.

Tetiana Petlyuk, of the Ukraine, with a season’s best of 1:59.76 is another danger.

1500m: An irresistible line-up for the 1500m is led by the masterful Russian Yelena Soboleva. The 2006 World Indoor silver medallist is well fancied to reverse her finishing position on that occasion with the then gold medallist Yuliya Fomenko (nee Chizhenko), after lowering her own World record with 3:58.05 to win her national championships. Soboleva has also set national records of 1:56.49 for the 800m and 4:20.21 for the mile this winter during a flawless indoor campaign. The defending World Indoor champion Fomenko had to play second fiddle to Soboleva in 4:00.21 at the National Championships but that too was a personal best.

Outside of Russia the strongest challenge will be posed by the one-two in the Stockholm meeting – Maryam Jamal of Bahrain and Gelete Burka of Ethiopia. Jamal, the 2007 World Championship 1500m gold medallist in Osaka, ran 4:04.30 to shade Burka by 0.07 in Sweden on her only indoor outing so far this season. Burka, too, should not be underestimated. After an injury-ravaged 2007 the 2006 World Cross Country short course champion appears to be rounding into excellent form.

3000m: Meseret Defar aims to match the achievements of Gabriela Szabo and secure a hat-trick of World Indoor 3000m titles. The peerless Ethiopian heads the world season lists after clocking 8:27.93 in Stuttgart and earlier in the indoor campaign she smashed the Two Mile world best with 9:10.50 in Boston. Possessing a fearsome kick finish and with an ability to sustain a furious pace it is hard to oppose the reigning Olympic and World 5000m champion.

Defar’s countrywoman, Meselech Melkamu, may be her main rival. The three-time senior World Cross Country bronze medallist is unbeaten over 3000m this season and her best time of 8:29.48 recorded in Valencia marks her out as serious medal contender.

The main challenger to the Ethiopian duo could be Morocco’s improving Mariem Alaoui Selsouli, who finished fifth over 1500m at last summer’s World Championships in Osaka, and ran a national record of 8:35.86 to finish second behind Melkamu in Valencia. The Russian pair of Yelena Sidorchenkova (8:44.61) and Olga Komyagina (8:48.71) are also capable of featuring on the medal podium and watch out too for New Zealander Kim Smith, who has set area records for the one and two miles this winter.

The 60m hurdles this season has all been about the extraordinary accomplishments of Susanna Kallur who starts a red hot favourite to add a World Indoor title to her two European Indoor gold medals. The super Swede, who is unbeaten in nine 60m hurdles races this season and holds the fastest five times in the world this year, set a sizzling World record in Karlsruhe last month, shaving 0.01 from the existing mark with 7.68.

Her main rival is likely to be US champion LoLo Jones who ran a new personal best of 7.77 for second in Karlsruhe behind Kallur. Jones, 25, appears to have stepped up to another level in the past year after finishing sixth in the 100m Hurdles final at the World Championships in Osaka.
Yauhenia Valadzko of Belarus is the third quickest in the field this year after her 7.89 time in Mogilyov in January, but she has failed to run below eight in each of her other five races over the distance this season. Other contenders are Cuba’s Anay Tejeda who set a national record of 7.90 in Karlsruhe, and Candice Davis, who clocked the same mark to finish runner-up at the US Championships.

High Jump: Yelena Sleserenko of Russia faces a huge test in her bid to win a hat-trick of IAAF World Indoor high jump titles. The Olympic champion may have enjoyed an excellent winter, four times jumping beyond the 2:00 barrier with a best of 2.02m in Brno but Blanka Vlasic of Croatia, the silver medallist in 2006, starts firm favourite.

Vlasic, the 2007 World Championships gold medallist, is unbeaten in six competitions this winter and in her last competition before Valencia she set a national record of 2.05m in Weinheim to head the World Lists.

Another major threat will be German Ariane Friedrich, who has improved by a massive 0.08 this winter and set a new lifetime best of 2.02m behind Vlasic in Weinheim.

The second string Russian Yekaterina Savchenko has also cleared the magic 2.00m barrier for the first time in her career this winter and is another to be watched. Also entered are 2006 World Indoor bronze medallist Ruth Beitia (1.98m) of Spain and Italy’s World Championships silver medallist Antonietta Di Martino of Italy (1.97m).

Pole Vault: Yelena Isinbayeva seeks a hat-trick of World Indoor Pole Vault titles after enduring an unusually erratic indoor campaign. The Russian great started the season in typically spectacular style bettering her own World indoor record with 4.95m in Donetsk but in her next competition she surrendered her 23-competition unbeaten streak to her fierce rival Svetlana Feofanova in Bydgoszcz after failing to clear 4.81m. Her first indoor defeat for four years was partially blamed on travelling, as she had attended the Laureus World Sports Awards in St Petersburg only 48 hours before competing in Poland but her rivals will be lifted by her defeat.

Feofanova, the 2003 World Indoor champion, may be the most likely to profit from any vulnerability. However, despite inflicting defeat on Isinbayeva in Poland, she has also shown fragility this season, finishing a disappointing third with a modest best 4.50m in Athens.

The best of the rest would appear to be US champion Jennifer Stuczynski who has cleared 4.71m while the 2003 World Indoor bronze medallist, Monika Pyrek of Poland, has a successful 4.67m clearance next to her name this indoor season and is another with medal ambitions.

Long Jump: Russia has dominated the women’s Long Jump at the World Indoor Championships and Irina Simagina, the Olympic silver medallist, is favourite in Valencia to maintain the status quo. The 7.27m outdoor jumper is unbeaten in all five competitions this season and her best leap of 6.96m in Stockholm suggests she is rounding into form nicely.

Her main threat could come from Portugal’s Naide Gomes, who finished just 0.03 behind Simagina in Sweden to stand second on the World Lists. Gomes won the World Indoor Pentathlon crown in 2004 but since concentrating exclusively on the long jump she has enjoyed great success and won the bronze medal at the 2006 World Indoor Championships in her new event.
The second string Russian, Olga Kucherenko is another to be respected if she can repeat her season’s best leap of 6.87m recorded in Krasnodor back in mid-January.

Watch out too for veteran Brazilian Maurren Maggi, the 2003 World Indoor bronze medallist, who set an area record of 6.87m in Stuttgart.

Triple Jump: In the absence of Tatyana Lebedeva, the 2004 and 2006 World Indoor champion, the Triple Jump looks a wide open competition. Leading the world season lists is Marija Sestak, of Slovenia, whose massive 15.08m to win in Athens caused a stir – although the 2007 World Championships fifth-placer has failed to come within 0.48 of that monster leap in her two other Triple Jump competitions this winter.
Greece’s vastly experienced Olympic silver medallist Hrisopiyi Devetzi finished second behind Sestak in Athens with a season’s best 14.89m and she will provide a big threat to the Slovenian.

Reigning World Championship Triple Jump gold medallist Yargelis Savigne of Cuba has a best this winter of 14.77m and is another with major medal aspirations.

A star studded field is headed by reigning World Championship champion Valerie Vili. The New Zealander makes her indoor debut of the season in Valencia, but she has made an encouraging start to the year with a series of top quality outdoor performances ‘Down Under’ led by a best mark of 20.13m.

Her chief rival will be Nadzeya Ostapchuk of Belarus, who finished behind Vili in the silver medal position in Osaka. The Belarus athlete, a two-time World Indoor silver medallist, has an impressive indoor season’s best of 20.35m to lead the World Lists and will be desperate to avenge her World Championship defeat at the hands of Vili.

German Christina Schwanitz must also be considered a medal contender after making a huge progression to put 19.68m to win in Chemnitz and elevate herself to second on the season’s world indoor lists.

Cuba’s Olympic champion Yumileidi Cumba is also entered, although her modest 18.16m best effort in Chemnitz in her only indoor appearance this winter means she has some improvement to make to feature on the podium in Valencia.

It is hard to oppose Russia in the 4x400m relay, who are bidding to win the gold medal in this event for an eighth successive time. Oleysa Zykina leads the World Lists for the 400m and Russia boast the fastest six women in the world for the distance. Belarus finished runner-up behind Russia at last month’s European Indoor Cup and Ilona Usovich – with a season’s best of 51.80 – will lead their squad.