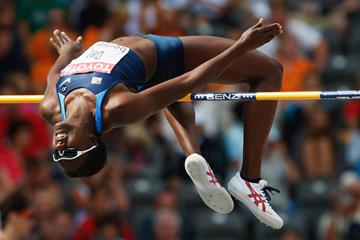 The preview for the Heptathlon could have been a very different one just a week or so ago but the fact that the two biggest names, Great Britain’s London 2012 Olympic Games champion Jessica Ennis-Hill and Russia’s 2011 World champion Tatyana Chernova, have withdrawn from the competition through injury changes everything.

Climbing the podium is now a possibility for a large number of the women in the field as the margins between the remaining athletes are very small.

It is not just that the two top favourites are missing, but there a number of others as well, and just two of the top eight from London will compete in Moscow.

Sixth at the Olympics Games last summer, France’s European champion Antoinette Nana Dijmou has only scored 6104 points this season. While she has been down on her best marks in some events this year, she has improved in others so is still expected to figure among the top eight again.

Russia’s Kristina Savitskaya is the other ’survivor’ from the London top eight, where she finished eighth.

This season has not gone well for her and it seems unlikely that she will fight for a medal in Moscow following a disappointing 6096 points for fifth place at the World University Games in Kazan last month.

Of all the entrants, the athlete with the best score in 2013 is the USA’s Sharon Day, who won at the US Championships in June with a 6550 points personal best score.

The 28-year-old will compete in her third successive World Championships having finished 10th in 2009 and 18th in 2011, and is now a medal favourite for the first time.

Germany’s 27-year-old Julia Machtig has the next best result this year, scoring a personal best of 6430 points when winning at the famous Ratingen meeting in June.

She has a similar World Championships history to Day, having also competed in 2009 and finishing ninth and then 2011, where she was 17th.

Poland’s Karolina Tyminska is the athlete with the best finish from the 2011 World Championships, she was fourth there with 6544 points, which still remains her personal best.

Tyminska, 28, has two good Heptathlons under her belt this season, 6360 points when finishing second in Kladno in June and a 6347 points European Cup Super League win in Tallinn three weeks later. Having finishing fourth in the Pentathlon at the 2012 IAAF World Indoor Championships, maybe she can finally lift her first major championship medal.

Ukraine's Hanna Melnychenko will also have medal ambitions. The 30-year-old won a bronze at the European Athletics Indoor Championships and has scored 6416 points in the Heptathlon this year.

Another interesting name is Canada's Brianne Theisen Eaton, wife of the USA’s 2012 Olympic Games Decathlon gold medallist and World record-holder Ashton Eaton. The 24-year-old won the Hypo Meeting in Götzis this season and efforts in individual events at the Estonian Championships (23.77 200m, 13.13 100m Hurdles) suggest that she should be near medals as well.

Several athletes are also extremely near the ones already mentioned.

Added to the list of top names are two European champions: Belgium’s 18-year-old Nafissatou Thiam won at the European Athletics Junior Championships with a senior national record of 6298 points while Great Britain’s Katarina Johnson-Thompson, 20, acquired the continental under-23 title with 6215 points, her first Heptathlon of the season.