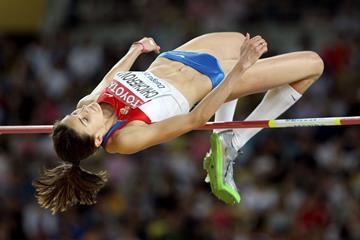 The battle for the gold medal looks to be between Russia’s reigning Olympic champion and defending World champion Anna Chicherova and the USA’s London 2012 Olympic Games silver medallist Brigetta Barrett and there is little to choose between them on current form.

They have faced each other twice already this season, both encounters coming last month.

Chicherova won at the IAAF Diamond League meeting in Paris when she went over 2.01m and Barrett had to settle for second with 1.98m, but the positions were reversed exactly – including the heights cleared – when Barrett got her first win in five meetings with her Russian rival in Monaco on 19 July.

The Monaco Diamond League was her last competition before Moscow and so Barrett will compete in the Russian capital with three weeks rest and a morale-boosting win, which is probably a good thing as she has had a busy outdoor season which started in March owing to college commitments in her final semester at the University of Arizona.

She already had 11 competitions, a schedule that included winning at the US Championships where she cleared a personal best and 2013 world-leading height of 2.04m.

If Barrett was to win, she would become the USA’s first World champion in this event.

Regular readers of the IAAF website have been able to follow Chicherova’s thoughts on the 2013 season via the IAAF Online Diaries and she lies second on this year’s World list.

Her record this season hasn’t been quite the same as her one ahead of London last year, but it is still impressive enough.

She went over 2.02m at the IAAF World Challenge meeting in Beijing in May, a mark which led the world until Barrett’s feat in Des Moines, and has 2.01m to her name from Paris, a win which helped her to top the Diamond Race with two competitions remaining.

Croatia’s 2007 and 2009 World champion Blanka Vlasic is the only other woman to have cleared 2.00m this season but, sadly, she pulled out of this year’s World Championships last week due to a foot problem.

In Vlasic’s absence, the other place on the podium looks wide open.

Last year’s Olympic bronze medallist Svetlana Shkolina, fifth two years ago in Daegu, has had another very consistent season and although she has only had three outings, she remains unbeaten.

She went over 1.98m for a share of first place at the Diamond League meeting in Rome, followed by two clearances at 1.97m to win in Oslo and then at the Russian Championships last month.

Her compatriot Irina Gordeyeva also went over 1.97m in Moscow but finished second to Shkolina on count-back. She has had an otherwise lacklustre season, although she cleared 2.04m last year and took bronze at the European Championships.

Kamila Stepaniuk improved the Polish record to 1.99m in June and got a confidence-boosting win on Russian soil when she won the World University Games in Kazan last month with 1.96m.

The prodigious Italian World junior champion Alessia Trost, the only woman over 2.00m indoors this year, has taken little time adjusting to senior competition and won the European under-23 title last month with 1.98m.

It would also be unwise to discount from the medal reckoning Spain’s Ruth Beitia, who has jumped 1.95m so far this year.

Now 34, Beitia was originally planning to retire at the end of last summer but took the European title in Helsinki, finished fourth at the Olympics in London and then added the European indoor crown in March, and has decided to put on hold any plans of hanging up her spikes and starting a family.