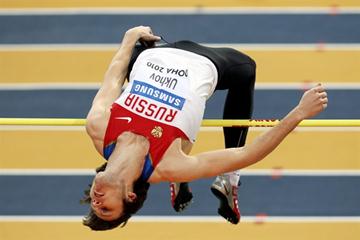 Ivan Ukhov has been a man on a mission in the wake of his failure to make the podium on home ground at the World Championships in Moscow last August.

The Olympic champion heads to Sopot unbeaten this winter and on the back of a European record-equalling 2.42m clearance in Prague last week and his sights are on Javier Sotomayor’s global indoor mark of 2.43m as well as the gold medal.

Fellow 2012 Olympic medallist Mutaz Essa Barshim, from Qatar, has been in fine form recently and won the Asian indoor title with 2.36m while USA’s 2012 Olympic silver medallist Erik Kynard has won five of his six outings this winter and set a personal best of 2.34m when winning in Birmingham.