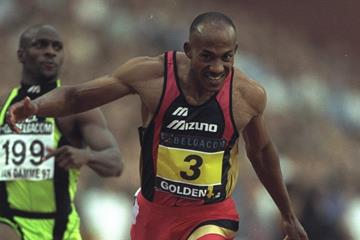 Frankie Fredericks works hard to gain the respect he deserves but the Namibian sprinter, who has run more sub-10 100m performances (21 including Oslo) than any sprinter in history, is a soft spoken man who, unlike most of his rivals, prefers to let his spikes do the talking.

For this reason, it was typical that while all eyes were on the reigning world champion Maurice Greene in the inaugural Golden League 100m in Oslo last Thursday, along came Fredericks to upset the form book. His victory may have been narrow - 9.95 to 9.96 - but the Namibian showed he has the experience and talent to win all 6 Golden League events and the Golden League Grand Prix Final in Moscow and so cash in on the 1 million dollar bonus offered by the IAAF with the assistance of its new Golden League sponsor Ericsson.

For the spectators, TV fans and athletes, the excitement of the new Golden League format is in seeing which winners can stay in contention for the bonus as the circuit moves to Rome, Monaco, Zurich, Brussels Berlin and finally Moscow. Some of the 12 Golden League event winners from Oslo have experience at holding a win-streak. Fredericks won each "Golden 4" race as well as the Grand Prix Final in 1997 while Hicham El Guerrouj did not lose a race at all last year until the Grand Prix Final when he was surprisingly beaten by Robert Kiplagat Andersen. There again, one of the best things about athletics is its unpredictability. Michael Johnson had only lost one 400m final in 9 years until Oslo when he was beaten by Britons Mark Richardson and Iwan Thomas while Sergey Bubka - a man who has won all six world titles available since 1983 - was timed out twice on the runway while attempting to clear a modest (by his standards) 5.60 in the pole vault.

As the Golden League moves to the second stop at the Golden Gala in Rome’s Olympic Stadium tomorrow night, we will all be interested in the form of seven men and five women. Of all of them, perhaps Marion Jones looks the safest bet - the American sprinter is clearly in a world of her own at the moment while Fredericks has the toughest challenge. The Namibian faces not only Greene - who will be anxious for revenge - but another John Smith trained world champion Ato Boldon who pipped Fredericks over 100m in Lille on Saturday (both timed at 10.05). With the stakes set so high, perhaps Rome’s historic Olympic Stadium is the place where the world record - so hungered after by Greene and Boldon - falls at last.