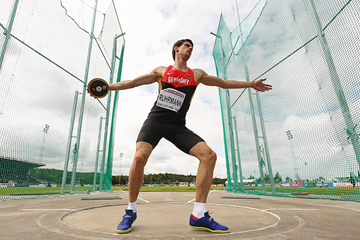 It has been 16 years since one nation took two decathlon medals at the IAAF World U20 Championships, but there’s a good chance of that happening in Bydgoszcz. The only question is whether it will be Germany or Cuba who achieves the feat.

Back in 2000, Germany’s Dennis Leyckes and Andre Niklaus took gold and bronze respectively in the decathlon in Santiago de Chile. This year, Germany will once again field two strong medal contenders in the form of Jan Ruhrmann and Niklas Kaul.

Ruhrmann has improved significantly since his 17th-place finish at last year’s European Junior Championships. The long-levered 19-year-old excels in the throwing events, the shot put in particular, and leads this year’s world U20 list with a score of 7972, just eight points shy of the German U20 record.

Kaul set a world U18 best of 8002 when winning the decathlon at the IAAF World Youth Championships Cali 2015. The javelin was his not-so-secret weapon on that occasion, his 78.20m effort putting him on course to take the gold medal. Three days later, he earned the silver medal in the individual event.

But the 18-year-old is yet to get to grips with the heavier senior implement this season. When scoring 7910 last month, he threw the javelin 58.82m – a respectable mark for any young decathlete, but perhaps some way short of what he had been hoping for. Nonetheless, if he manages to get close to his lifetime best of 69.68m in that event, he could challenge for gold.

Cuba’s Santiago Ford is sandwiched between the Germans on the 2016 world U20 list, having scored 7943 earlier this year. The 18-year-old is a strong sprinter, a superb high jumper and an all-round solid thrower, but struggles somewhat in the pole vault. He is also yet to prove himself at a major championships, having scored way below his best at the 2013 World Youth Championships and 2014 World Junior Championships.

If Ford isn’t on top form, teammate Rafael Noguera could get among the medals. A consistent performer, his three decathlons this year have ranged between 7588 and 7663.

Other contenders include Rik Taam of the Netherlands, world U18 bronze medallist Hans-Christian Hausenberg of Estonia and Canada’s Nathaniel Mechler.