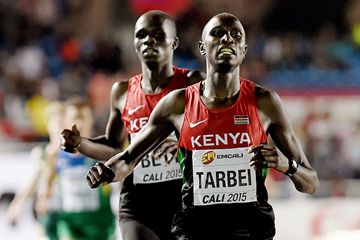 Eight of the year’s 10 fastest U20 men are expected to line up in the 800m with Kenya arriving as a solid threat to repeat their gold-silver finish from Eugene two years ago.

They will be led by Kipyegon Bett and Willy Tarbei, at 1:44.4 and 1:44.84 the second and fourth-fastest U20 men in the world this year. The two athletes, both 18, bring valuable experience, too.

Tarbei edged Bett for gold by just 0.28 at last year's IAAF World Youth Championships in Cali, padding the event's script book with the dimension of the pair's rising rivalry. Bett beat Tarbei by 0.2 at the Kenyan Junior Trials.

Mostafa Smaili of Morocco appears to be the Kenyans' biggest threat. With a strong sixth-place finish at the IAAF World Indoor Championships in March, the 19-year-old also brings major championship experience to Bydgoszcz. In early June, he improved the national U20 record to 1:45.05 in Samorin, Slovakia, the fifth-fastest U20 performance of the season, and later in the month collected a confidence-boosting victory at the Paavo Nurmi Games in Turku.

Others expected to figure in the medal hunt include Jesus Tonatiu Lopez of Mexico, German Robert Farken, Robert Heppenstall of Canada, Puerto Rican Ryan Sanchez and Vincent Crisp and Carlton Orange of the US, all of whom have run faster than 1:47 this year.

USA’s world U20 leader Donavan Brazier will be absent. The NCAA champion skipped the US Junior championships in favour of the US Olympic Trials where he didn't reach the final.