Jared Tallent and Ines Henriques are the favourites for the ‘Gran Premio Cantones de Marcha' – the Spanish leg of the 2013 IAAF Race Walking Challenge – on Saturday (1) in La Coruña, a city which has annually hosted this world-class competition since 1987.

Men and women will compete in the 20km Race Walk at the north-west Spanish coastal city which hosted the 2006 IAAF World Race Walking Cup and the 2011 IAAF Race Walking Challenge. The flat 1km circuit is an ideal course on which to set fast times while spectators also benefit from the chance to witness a star-studded field in action.

Tallent is the man to beat

The men's event offers a vast array of talent headed by Olympic 50km silver medallist Jared Tallent. The Australian won his third Olympic medal in London following his double success in Beijing 2008 when the 27-year-old bagged silver in the 20km and 50km events.

As for his current form, Tallent will be making his third appearance so far this year after two other 20km efforts; the first came on home soil in Hobart at the inaugural IAAF Race Walking Challenge permit when he clocked a winning 1:22:10. Just five days later he finished third in Taicang, China, with a season’s best of 1:20:41.

Tallent leads a powerful Australian contingent which also includes the fast-improving Dane Bird-Smith, who was runner-up in Hobart with a PB of 1:22.27. The 20-year-old also finished on the podium at the IAAF Race Walking Challenge in Sesto San Giovanni, finishing third in 1:23:18. The other Australian on show on Saturday is the experienced Luke Adams, a consistent top-eight finisher at major championships over both walking distances. The 36-year-old holds a season’s best of 1:23.48, set in Hobart.

Japan will also have a strong squad this weekend, led by Takumi Saito, who finished second at the National Championships in February with a massive PB of 1:20:05. The 20-year-old returns to Spain after finishing fourth at last summer’s IAAF World Junior Championships in Barcelona where he just missed the bronze medal by a couple of seconds.

Saito will be joined in La Coruna by his countrymen Koichiro Morioka, who finished third in Kobe with a PB of 1:20:14, 2012 Olympian Isamu Fujisawa and World Championships 50km ninth-place finisher Takayuki Tanii.

The European challenge is expected to come from 37-year-old Portuguese Joao Vieira, fresh from a seventh-place finish at the European Cup in Dudince two weeks ago. The 2010 European bronze medallist enjoyed a fantastic success in front of his home crowd when he won the Rio Maior IAAF Race Walking Challenge in April with a season’s best of 1:21:08 – just a minute outside his national record.

As the European 50km silver medallist in Barcelona 2010, Grzegorz Sudol has fond memories of Spain. More recently, the Pole has posted respective fifth-place finishes at both the IAAF Race Walking Challenge in Chihuahua (1:25:06) and the European Cup in Dudince over 50km (3:46:41).

Another notable entrant is Ukraine’s Andriy Kovenko, who at 39 years old won the National Championships earlier this year with a PB of 1:20:22. Despite a below-par eighth-place finish in Sesto San Giovanni, World bronze medallist Luis Fernando Lopez of Colombia cannot be discounted.

In the absence of Miguel Angel Lopez and Benjamin Sanchez, Spanish hopes rest with the evergreen Jesus Angel Garcia, winner of the World 50km title 20 years ago and still going strong at 43 years old. At the opposite end of the age scale, he will be joined by 18-year-old Alvaro Martin, who finished fifth at last year’s World Junior Championships in Barcelona.

Portugal’s Ines Henriques, current leader in the IAAF World Race Walking Challenge standings, leads the entrants in the women’s race. The 33-year-old won in Chihuahua in February before setting a season’s best of 1:29:56 for fourth place in Rio Maior.

The third Portugal-born walker on show will be Vera Santos, the 2003 European Under-23 champion. Her season’s best of 1:32:54 from the European Cup in Dudince is some way adrift of her 1:28:14 PB set at the Beijing Olympics.

Trying to deny the honours to the Portuguese team will be Spain’s Beatriz Pascual, a creditable eighth at last year’s London Olympics. The 31-year-old, who won in La Coruna back in 2010 and came second last year, should improve on her season’s best of 1:31:49 from Rio Maior to have a shot on Saturday. Pascual’s compatriot Julia Takacs should also be a factor after dramatically lowering her PB to 1:28:44 this season in Murcia.

Weather forecasters predict temperatures in the 14-17°C range by the time of the competition and a very low likelihood of rain.

BACK
Pages related to this articleAthletes
Inês HENRIQUES 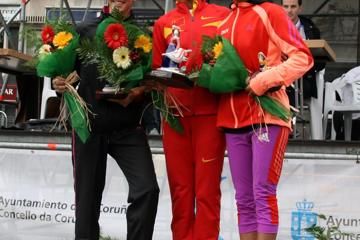 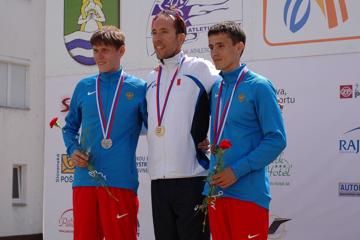 Russia's anthem rings out all day in Dudince ... 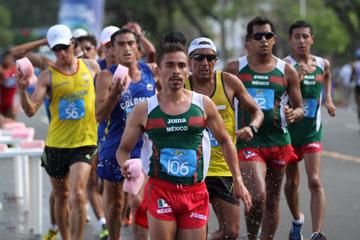