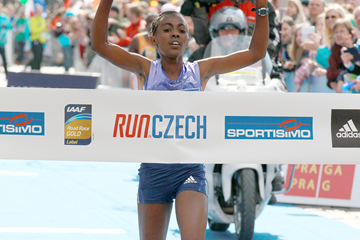 The 10th edition of the Yangzhou Jianzhen International Half Marathon could see its course record finally break through the one-hour barrier on Sunday (19), as the organisers of the IAAF Gold Label Road Race have assembled a strong men’s field.

It will be the third straight time for Eritrea’s Nguse Amlosom to compete in Yangzhou after he finished third in 1:00:46 in 2013 and trimmed 31 seconds off the course record en route to winning last year’s race in 1:00:08.

But this time the 28-year-old defending champion, whose personal best is 59:39 when he finished second in Ras Al Khaimah last February, could face a tough challenge as nine other runners in the field have a PB faster than an hour.

Atsedu Tsegay is one of the favourites in Yangzhou. The 23-year-old holds the Ethiopian half-marathon record with 58:47 and more recently he finished seventh at the IAAF World Cross Country Championships. But his two half-marathon performances last year were more than five minutes slower than his PB.

Kenya’s Mathew Kisorio is also a serious contender. His PB of 58:46 is one second quicker than Tsegay’s and makes him the third-fastest ever for the distance. Last month he clocked 1:01:53 to finish third in Nairobi.

And Kisorio will not be competing alone in Yangzhou as his brothers Peter Some and Nicholas Togom will both join him on the starting line.

Some set a marathon PB of 2:05:38 when winning in Paris two years ago and earlier this year he finished fifth at the Tokyo Marathon in 2:07:22. His half-marathon PB of 1:00:21 was set one month before his marathon PB.

The 23-year-old Ethiopian Mosinet Geremew also has a speedy PB to his name. He clocked 59:11 to finish third in New Delhi last November and won a three-man battle for the line in 1:00:05 at the Ras Al Khaimah Half Marathon earlier this year.

Simon Cheprot of Kenya is arguably the in-form athlete in the men’s field. He finished second at the Roma-Ostia Half Marathon last month in 59:39, just 19 seconds away from his PB. And in Yangzhou, Cheprot will once again meet Uganda’s Geofrey Kusuro who registered his fastest-ever time of 59:43 to finish third in Rome.

There are four more runners in the sub-hour club, including Moroccan record-holder and 2014 Rome Half Marathon winner Aziz Lahbabi (59:25), Kenyan trio Daniel Kipchumba Chebii (59.49), Alex Oloitiptip (59:58) and Victor Kipchirchir Lagat (59:31), who clocked a below-par 1:02:35 to finish fourth in Warsaw three weeks ago.

Now Degefa is ready to retain the title – and maybe the course record – in Yangzhou after her significant victory at the Prague Half Marathon in March, cutting 35 seconds off her PB to win in 1:07:14.

Cheyech has a PB of 1:07:39 when she claimed the title at the 2013 Roma-Ostia Half Marathon, where Degefa set her previous PB of 1:07:49 to finish third. Last year the 32-year-old won the Paris Marathon and the Commonwealth marathon title.

Ethiopian duo Guteni Shone (1:08:31) and Netsanet Gudeta (1:08:46) are also among the favourites. Shone improved her marathon PB to 2:23:32 when finishing second in Houston in January and went on to win at the Seoul Marathon in 2:26:22. Gudeta was the bronze medallist at the World Cross Country Championships in Guiyang.

First launched in 2006, the Yangzhou Jianzhen International Half Marathon became an IAAF Silver Label Road Race in 2010 before being upgraded to Gold status in 2013.

The 2015 edition will be conducted together with the Chinese Championships, with some 18,000 runners expected to compete in the half marathon events and the associated 10km and 5km races to attract some 19,000 in total from the public.