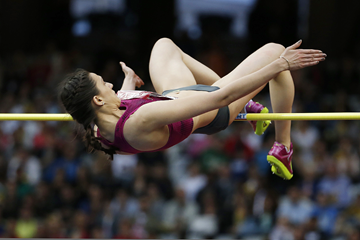 World champions Kuchina and Shubenkov to star in Zagreb

Seventeen freshly minted medallists from last month’s IAAF World Championships will be the key attractions at the 65th edition of the Boris Hanzekovic Memorial in Zagreb, Croatia on Tuesday, the penultimate IAAF World Challenge meeting of 2015.

That list includes a pair of individual champions from Russia, women’s high jump winner Maria Kuchina and Sergey Shubenkov, the victor in the 110m hurdles.

Vlasic, the Beijing silver medallist and long-time national athletics heroine, will also be in attendance in the Sportspark Mladost, the venue that witnessed her first two-metre clearance and her 2.08m national record, but she won’t be competing. Vlasic chose to end her season after the World Championships to fully mend from the injuries that dogged her over the past two seasons.

Shubenkov meanwhile will headline the meeting’s signature race, named to honour Croatia’s inter-war hurdler Boris Hanzekovic. Shubenkov, who won in Zagreb last year, blasted to a 12.98 national record in Beijing to add the world title to the pair of European crowns he won in 2012 and 2014.

The men’s 110m hurdles traditionally boasts the meeting’s strongest field. Unfortunately, injury in Zurich has forced perennial threat David Oliver and world leader Orlando Ortega to the sidelines, but Shubenkov will still have to fend off Frenchman Pascal Martinot-Lagarde and Jason Richardson of the US to bag the evening’s largest trophy.

In the women’s sprint hurdles, Alina Talay of Belarus, whose 12.66 national record propelled her to a surprise bronze in Beijing, leads the field. She’ll face Sharika Nelvis, the world leader at 12.34, and Tiffany Porter of Great Britain, the European champion who was fifth in Beijing. Nelvis will be looking to bounce back from a disappointing eighth place finish in the Birds Nest.

The women’s discus features Zagreb native Sandra Perkovic, one of three reigning Olympic champions on the start lists, who’ll be hoping that a home field advantage will help her return to winning ways after she lost the world crown in Beijing. Her fiercest challenge is expected to come from German Nadine Müller, who finished third in the Chinese capital last month.

And in the men’s long jump, Fabrice Lapierre of Australia, another Beijing silver medallist, will be challenged by South African Zarck Visser, who’s improved to 8.41m this year.

In the men’s 100m, Mike Rodgers of the US and Jamaican Asafa Powell, fifth and seventh in the Beijing final respectively, lead a field which also includes European champion James Dasaolu of Great Britain.

Over the half lap, Panama’s Diamond Race winner Alonso Edward brings the momentum of his Zurich victory to the start line here where his main challenger is expected to be Turkey’s Ramil Guliyev who was sixth in the event in Beijing.

In the women’s 100m, Pan American champion Sherone Simpson of Jamaica will square off against a pair of world 4x100m bronze medallists from Trinidad and Tobago, Michelle-Lee Ahye and Semoy Hackett. Ahye finished fifth in the 100m Beijing.

And over the full lap, world 400m finalist and 4x400m gold medallist Novlene Williams-Mills will butt heads with Natasha Hastings of the US and Anyika Onuora of Great Britain, silver and bronze medallists, respectively, in the 4x400m.

The meeting begins on Monday night with the men’s shot put near the City Fountains Park in central Zagreb where a large crowd is expected.

Rounding out the throws is the men’s javelin, which also features the reigning Olympic champion. Keshorn Walcott of Trinidad and Tobago joined the event’s exclusive 90-metre club in Lausanne this year with his 90.16m area record, and will be looking to bounce back from a disappointing Beijing outing where he failed to reach the final. His chief rival will be Germany’s Thomas Rohler who was fourth in Beijing, just 23 centimetres shy of a medal.

Surprise world 10,000m bronze medallist Emily Infeld will compete in the women’s 3000m while Olympic bronze medallist and Beijing finalist Leo Manzano of the US leads the field in the men’s 1500m.