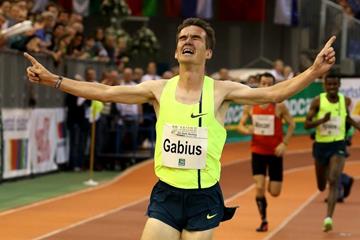 Six world-leading marks were among the highlights of the 10th PSD Bank Meeting in Dusseldorf on Thursday (29), with St Kitts’ evergreen sprinter Kim Collins showing there is still plenty of zip in his legs despite near veteran status.

Collins, now 38, sped to a 60m win in 6.52 and beat Great Britain’s European 100m champion James Dasaolu, who was given the same time, while USA’s 2010 world indoor silver medallist Michael Rodgers was third in 6.58.

Collins had shown he was the man to watch with a time of 6.55 in his heat less than an hour earlier.

Kenya’s Nixson Chepseba won the 3000m in a world-leading 7:44.72, showing his strength on the final lap to hold off his compatriot Paul Kipsiele Koech, who was second in 7:45.79.

US pair Ryan Whiting and Christian Cantwell, who between them have won five of the past six world indoor shot put titles, had a duel that will be repeated again on German soil on Saturday at the IAAF Indoor Permit meeting in Karlsruhe.

Whiting underlined his good form when he sent his shot out to a world-leading 20.83m in the fourth round. All three of his valid throws were better than Cantwell’s best of 20.53m.

Poland’s two-time European indoor 800m champion Adam Kszczot was victorious in the 800m for the fourth consecutive year in Dusseldorf when he won on one of his favourite indoor tracks in a world-leading 1:46.48, just edging out his compatriot Marcin Lewandowski, who was second with 1:46.74.

Belarusian hurdler Alina Talay, the European indoor 60m hurdles silver medallist, proved she is rounding into good form ahead of this year’s championships in Prague in five weeks’ time when she sped to a world-leading 7.96 over the barriers.

However, possibly the biggest cheers of the night came when Arne Gabius won the 5000m in a national indoor record and world-leading time of 13:27.53.

Another German victory came in the women’s triple jump when Kristin Gierisch bounded out to an indoor personal best of 14.30m in the fifth round.

Ukraine's Olga Saladukha was the favourite, but the off-form former world champion could only reach 14.14m and had to settle for second place.

Switzerland’s Selina Buchel won the 800m in 2:01.87, the second-fastest time in the world at this early stage in the season.

Great Britain’s Lawrence Clarke won the 60m hurdles in a personal best of 7.63, with Germany’s Erik Balnuweit and Cuba’s former 110m world record-holder and 2008 Olympic gold medallist Dayron Robles second and third respectively, both being given the same time of 7.64; the latter paying the price for a rather sluggish start.

Poland’s Robert Sobera won the pole vault with 5.65m and collected some notable scalps. Greece’s world indoor champion Konstadinos Filippidis was only able to go over 5.60m on this occasion and Germany’s world champion Raphael Holzdeppe was still struggling to find his rhythm and finishedfifth with 5.50m, needing three attempts to get over that height and his preceding 5.40m.

South Africa’s Carina Horn took the honours in the women’s 60m with a win in 7.21, her second personal best of the night after clocking 7.27 in her heat.