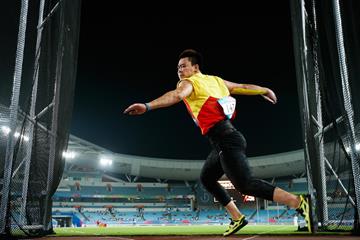 Chinese athletes won all of the throwing events in Bangkok on 21-22 May at the Asian Trials for the Youth Olympic Games.

World youth bronze medallist Cheng Yulong was one of the top performers. He won the discus with a PB of 63.66m, defeating Chinese team-mate Zhang Xiangnan, the 2014 world youth leader. Zhang could only manage 62.82m on this occasion; almost three metres shy of his best mark of the year, 65.52m.

Having secured his place on the team for the Youth Olympic Games in Nanjing later this year, Cheng – along with China’s other leading youth athletes – will no doubt be keen to impress on home soil.

Of China’s seven other throws victories in Bangkok, four of them came from reigning Asian youth champions. Han Jianping won the boys’ shot with 18.75m, while Dong Yu took the women’s event with a PB of 16.92m. Ding Yuanbo won the boys; hammer with 75.58m and Sun Kangping threw a world-youth-leading 52.07m to win the girls’ discus.

Xiang Jiabo was another impressive victor, winning the boys’ javelin with a PB of 78.69m, putting him second on this year’s world youth lists.

China also impressed on the track. Xu Zhihang smashed his PB to win the 400m hurdles in 50.74, the fastest time in the world this year over the 84cm barriers, although Jamaica’s Jaheel Hyde has run faster over the senior-height hurdles. Thailand’s Asian youth champion Witthawat Thumcha was second in a PB of 51.01.

Fresh from winning the Arab junior title with a national senior record of 5.32m, Saudi Arabia’s Hussain Asim Al-Hizam was a comfortable winner of the pole vault with 5.10m.