The 33rd edition of the Montée du Grand Ballon in France’s Vosges Mountains on Sunday (2) had two big races in one: it was the French Mountain Running Championships and the first race in the 2013 WMRA Grand Prix series.

During the weeks before the event it was raining every day, but luckily enough it stopped on race day. In the men’s race over 13km, and with 1230m elevation, there was an early shock when Turkey’s Ahmet Arslan, the 2011 WMRA Grand Prix champion and one of the pre-race favourites, dropped out injured after just 3km.

Eritrea’s Azeria Teklay took the lead in the early stages and won easily, his time of 1:00:05 being one of the best achieved on this course although the record is still the property of New Zealand’s Jonathan Wyatt with 48:01.

Behind Teklay, the medal positions changed regularly and Switzerland’s David Schneider, the race winner in 2011, came through in the last kilometre to take the second place from Italy’s Alex Baldaccini, who had to settle for third.

Julien Rancon was the first local runner home in fourth place to retain his title of French champion for the third consecutive year as 495 runners finished the race, which was muddy underfoot after consistent rain in the preceding weeks but saw temperatures of 11 degrees Celsius at the start of the men’s race in Willer-Sur-Thur, and around 6 degrees near the 1424m summit of the Grand Ballon mountain.

There was no surprise about the winner of the women’s race over 8km and with 822m elevation as Italy’s Valentina Bellotti won for the second successive year, although her winning time of 47:07 was one minute slower than 12 months ago.

The winner of the junior men’s race, on the same course as the senior women’s race, was Switzerland’s 19-year-old Stefan Lustenberger in 43:50.

The last race over 4km and 365m elevation saw three French victories: Julie Latger won the junior women’s category in 26:11, the boys’ title went to Jeremy Belmkacen in 20:45 and the girls’ winner was Melanie Rignauld in 26:49. 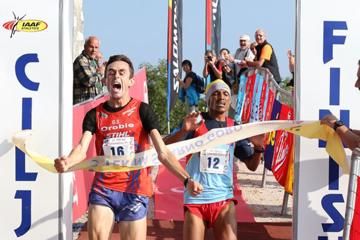