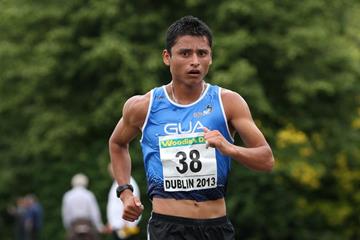 There was a comfortable win for Guatemalan favourite Erick Barrondo in thre 20km Race Walk at the Dublin Grand Prix of Race Walking – part of this year’s IAAF Race Walking Challenge and the last event in the series before the IAAF World Championships – but there were surprises in the other two events in the Irish capital on Saturday (29).

For the first time in the 19 years of the Grand Prix, there was also a switch in venue with Phoenix Park being rejected in favour of the user-friendly St Anne’s which the organisers judged was better for attracting spectators.

The 2km circuit had just the slightest of rises, and the walkers had to tackle a breeze that got up for the two 20km races, but when it came to road surface, this was as good as it gets. There was even a suspicion that the organisers had been out with a paver during the night, such was the smoothness of the tarmac.

Making early use of the slick surface in the 50km was Barrondo’s compatriot and training partner Jaime Quiyuch, a former Pan-American Games bronze medallist with a best of 3:50:33.

The Guatemalan cruised through 10km in 46:27, with Finland’s Veli-Matti Partanen towing the British twins Daniel and Dominic King more than minute in his wake.

Quiyuch hit 20km in 1:32:56 and appeared away and gone. He had a lead of almost five minutes over the 22-year-old Finn at 40km but then things started to badly wrong from Quiyuch who threw in the towel on the next lap.

It was a case of second time lucky for Partanen, after failing to finish at the European Cup Race Walking in the Slovakian spa town of Dudince last month, as he pushed on to dip under the magical four-hour barrier with 1:10 to spare and won in 3:58:50.

In fact, his metronomic count on each kilometre was uncanny.

Partanen’s slowest kilometre was 4:37; his quickest 4:35 to underline an even pace that paid off handsomely. Daniel King survived to finish second more than 19 minutes back in 4:17:15, with only one other finisher from a field of nine.

Partanen wasn’t the only winner happy in Dublin.

Spain’s Maria Jose Poves has for many years been languishing in the shade of some of her better-known team mates but, after winning the bronze medal at last year’s IAAF World Race Walking Cup, and in the absence of the likes Maria Vasco, Beatriz Pascual and Julia Takacs, the 35-year-old Poves seized her chance to shine again.

The smart money was initially on Mirna Ortiz, who had clocked 1:28:31 for second place in the IAAF Race Walking Challenge meeting at Rio Maior, Portugal, in April.

However, the Guatemalan incurred the judges’ displeasure at 15km despite holding a 21-second lead, over Poves; and the latter strode on to win in 1:29:58, only just over a minute slower than her best when she wasn’t walking into a stiff breeze for part of the course.

In second place, Mexico’s 20-year-old Yannelli Caballero is starting to fulfil some of her youthful promise and came home in a personal best time of 1:30.58, improving by over three minutes in her first race over the distance at an altitude approaching sea level

Caballero was second over 5km to Russia’s London 2012 Olympic Games champion Yelena Lashmanova at the 2009 IAAF Youth Championships and won the 2010 Central and Caribbean Championships junior 10km title and is coached by 1996 Olympian Ignacio Zamudio.

If the Guatemalan challenge had proved less than robust in the first two senior races of the day, Erick Barrondo changed all that and made sure the men’s 20km was over by the halfway point reached in 40:22.

That’s how long it took the 2012 Olympic Games silver medallist to shake off an early bunch of seven and motor to the finishing line.

There have been critics of Barrondo’s style in the past, which saw him disqualified in the 50km at the 2012 Olympic Games, but here he was fluency itself in a race where the gaps at the end were massive.

Spain’s Benjamin Sanchez was an isolated figure for second in 1:23:25 and Mexico’s Omar Segura was more than a minute in arrears in third place as he completed the podium in 1:25.00.

Former IAAF Race Walking Challenge winner Eder Sanchez was forced to call it a day at 16km when recovery from knee surgery in January wasn’t quite as swift as the Mexican hoped.