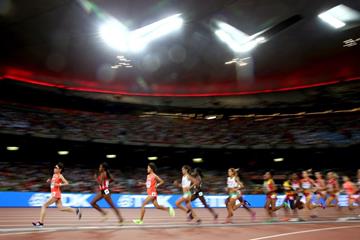 What we learned on day three – IAAF World Championships Beijing 2015

At the end of any event, it's time to look back and see what was learned and what can improve next time. This is what we learned on Monday, day three of the IAAF World Championships Beijing 2015:

When Shelly-Ann Fraser-Pryce won the women's 100m in dominant fashion as usual, the surprise of the moment wasn't Jamaica's "Pocket Rocket" but the silver medallist, the Netherlands' Dafne Schippers, who was and probably still is a heptathlete (she was world junior champion in 2010).

Schippers ran a Dutch record of 10.81 and may inspire an entire generation of sprinters to consider high jumping.

The Kiprutos did most of the leading, but it was Kemboi who had the monster move with 200m to go which sorted out some of the medals and put him in a position to celebrate after the finish. While Jager was in the mix until the final lap, it was his team-mate Daniel Huling who followed the Kenyan romp in fifth (8:14.39) while Jager wobbled in sixth (8:15.47).

Kemboi, as is now traditional, danced during his lap of honour. Kemboi has been fully as dominant as Bolt and Fraser-Pryce in his specialist event over the past eight years.

Canada's younger generation is not to be sneezed at

Only defending champion Raphael Holzdeppe was able to join Barber at the next height, clearing 5.90m on his second attempt, but by then the gold was Barber's to lose.

Like men's 100m bronze medallist Andre De Grasse, Barber was a champion in the US collegiate system this spring. Both turn 21 this year and, like 20km race walk bronze medallist Ben Thorne, are likely to continue developing. Look for Canada to pick up big points at the 2021 World Championships.

Always run through the line

We also learned that three-time world champion Vivian Cheruiyot is back, certainly, with a commanding closing 200m that disposed of Gelete Burka – herself a ferocious competitor in the 1500m – but the 3, 4, 6 finish of US team-mates Emily Infeld, Molly Huddle, and Shalane Flanagan had its order set when Huddle, raising her arms to claim bronze, was nosed out by the fast-closing Infeld.

Caterine Ibarguen is as reliable as the tide

The last triple jump competition Caterine Ibarguen lost was the London 2012 Olympics, meaning she has now won 29 competitions in a row.

If there was anything at all unexpected about the women's final, it was silver medallist Hanna Knyazyeva-Minenko, whose national record of 14.78m secures Israel’s first World Championships medal in a women’s event.