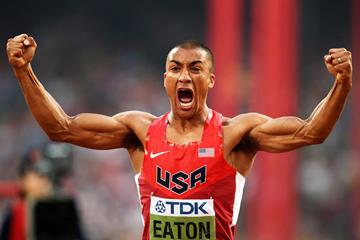 It was never going to be easy – world records never are – but Ashton Eaton had decided that three years and two months was long enough for his mark of 9039 to stand.

A 5.20m clearance in the pole vault meant that the world record was going to be difficult, but a 63.63m throw in the javelin made his task slightly easier.

The 27-year-old was outside the required pace for the first 400m, but he moved closer to the front after seeing the first-lap split of 1:09.34 from Germany’s Michael Schrader.

Algeria’s Larbi Bourrada then took up the lead and passed 800m in 2:21.56 with Eaton close behind. But there was still ground to make up.

As he approached the final lap, Eaton appeared to have already given it all he had. He needed a 63-second last lap to achieve his target, so – from somewhere – he found an extra gear.

With Bourrada away and clear, Eaton charged down the home straight and crossed the line in 4:17.52, some 0.73 quicker than the time he needed. The world record* now stands at 9045, six points more than his previous mark, and thanks to the support of IAAF partner TDK, earned him a world record bonus of US $100,000.

The US all-rounder won his second successive world title in the decathlon and has now won six consecutive global titles, indoors and outdoors, since 2012.

Eaton also became the first athlete since Jurgen Hingsen in the 1980s to set two successive world records in the decathlon. And he is the first decathlete to set a world record at the IAAF World Championships.

Canada’s Damian Warner just missed the 8700-point barrier, but ended his series with a 4:31.51 clocking in the 1500m to bring his score to 8695, improving the Canadian record for the second time in just five weeks. It was also the second successive World Championships medal for the 25-year-old, who finished third in Moscow in 2013.

As anticipated, Germany’s Rico Freimuth’s advantage over the other medal contenders was too much and the 27-year-old held on to bronze, taking his first major medal with a 8561 PB after running 4:37.05 in the 1500m.

Germany’s Kai Kazmirek, the Gotzis winner earlier this season, was sixth with 8448. Schrader, the 2013 silver medallist, was seventh with 8418.

Grenada’s Kurt Felix set a national record of 8302 in eighth place. For the first time in World Championships history, seven men scored in excess of 8400 points.