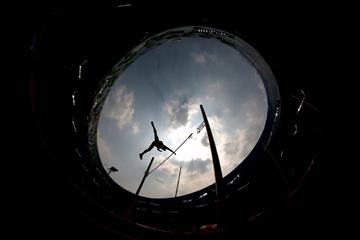 Event leader Ashton Eaton produced the second-best clearance in the decathlon pole vault, his 5.20m keeping him well on course to retain his title.

The Olympic champion had some mild tightness in his achilles going into the eighth event of the two-day contest, but he didn’t let it show. After clearing 5.20m on his second attempt, as he had done with his three previous heights, he pondered whether to go for 5.30m or rest up a bit and enter again at 5.40m.

He went for the safer option of trying 5.30m and was particularly close on his first attempt, but it wasn’t to be.

Nevertheless, it brought his points tally to 7423 and he still has a chance of breaking his own world record. If he matches his 64.83m distance from Moscow in the javelin, then he will need to run 4:21 in the final event to equal his world mark of 9039.

Damian Warner consolidated his overall second-place position after clearing 4.80m in the pole vault. He trails Eaton by 254 points with just two events to go.

Germany’s Rico Freimuth, who cleared 4.80m in the pole vault, is just 54 points behind Warner in third, but Russia’s Ilya Shkurenev has moved up to fourth in the overall standings after his 5.20m vault. The European indoor champion is a better javelin thrower and 1500m runner than Freimuth, so the battle for bronze will be close between them.

Algeria’s Larbi Bourrada is also in contention for the bronze medal. He cleared 4.80m in the pole vault and currently sits eighth, but he is a solid javelin thrower and has one of the fastest 1500m PBs of the field.

Just 14 points separate Germany’s Kai Kazmirek and Ukraine’s Oleksiy Kasyanov after the pole vault; they cleared 5.20m and 4.80m respectively and sit in fifth and sixth. But they will have their work cut out to finish higher than that at the end of the competition.

Belgium’s Thomas van der Plaetsen was the best pole vaulter of the day. The World University Games champion got over a season’s best of 5.30m to move up three places into 13th and could get into the top 10 by the end of the competition.