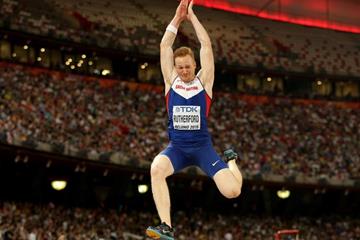 For the partisan crowd that had filled the Bird’s Nest Stadium, the men’s long jump – with three Chinese finalists – was the highlight of the evening.

Beforehand it had seemed as though the Chinese only had an outside shot at the medals. But at one point in the latter stages of the competition, Chinese athletes filled three of the top four spots.

The competition started slowly with big first-round fouls from both of the favourites. Briton Greg Rutherford, the Olympic champion, and USA’s Jeffery Henderson, the recent Pan American Games champion, both had jumps that would have easily taken the lead with their first attempts but the red flag went up for both.

Rutherford then stepped up with a good 8.29m jump in the second round, moving into a clear lead. Henderson again had a good jump, but this time it was 27.5 centimetres behind the board – his toes not even in contact with the board – and he landed at 7.95m.

To the delight of the home crowd, Chinese athletes occupied the two other medal positions early. Both Wang Jianan and Gao Xinglong jumped 8.14m in round one, then 18-year-old world junior champion Wang bettered that with his second jump of 8.18m to move into the silver medal position.

Meanwhile, defending champion Aleksandr Menkov of Russia had jumped 8.02m, Chinese record-holder Li Jinzhe leaped 7.69m and USA’s Mike Hartfield had no mark, so all were in trouble before their crucial third-round jumps.

Henderson, competing for the first time at the World Championships and having qualified easily with his first jump of 8.36m in the qualification, also fouled his third jump. As the sixth athlete on the startlist, he sat on the bench with his back turned to the runway, waiting to hear if he had made it through to take three more jumps.

It turned out to be a bad day for US long jumping. Three athletes passed Henderson, ending his competition in ninth place with 7.95m, while Hartfield fouled his last jump and took no further part.

With the US jumpers out of the top eight and Menkov struggling to find his rhythm, there was no one to prevent Rutherford from winning his first world title – or his first World Championships medal of any colour – to go alongside his Olympic title from 2012 and European and Commonwealth titles from 2014. After another big foul in the third round, the 28-year-old secured the title with his fourth-round jump of 8.41m, a season’s best and his second-best jump ever.

Behind the Briton, the fight for the two remaining medals heated up in the last three rounds. With all three Chinese athletes only able to produce fouls landing at the 8.25-8.35m region, Australia’s Fabrice Lapierre, the 2010 world indoor champion, moved to the silver medal position in round five with an 8.20m season’s best.

Lapierre held on to his silver medal, bettering his mark to 8.24m with his last jump, but there was still controversy left. With Li fouling his last jump, fourth-placed Gao seemed to have a medal jump of about 8.30m in the last round, but the measurement flashed up as 8.02m; apparently some part of his kit or bib had touched the sand at that point.

It meant that Wang became the youngest ever medallist in this event. With his 19th birthday coming up on Thursday, he was 18 years and 364 days old today. Previously the youngest to win a medal was Jamaica’s James Beckford, who won the silver in 1995 at the age of 20 years and 215 days. It took Wang just a year to progress from being a world junior champion to World Championships medallist.

Gao, competing at his first World Championships, was fourth with an 8.14m season’s best, missing his personal best by just four centimetres. Li, the world indoor silver medallist, was a disappointing fifth with 8.10m and Menkov was sixth at 8.06m. France’s Kafetien Gomis was seventh with 8.02m and Russia’s Sergey Polyanskiy, with 7.97m, completed the top eight.