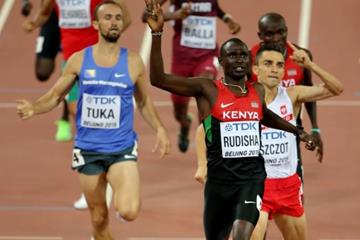 Nine years ago in Beijing, he was named the ‘Pride of Africa’ by local journalist after winning the world junior title, a day that marked the beginning of a glorious career.

On Tuesday, David Rudisha was victorious on Chinese soil once again, reaching another important milestone: a successful comeback after two injury-ridden years.

Rudisha is a unique athlete.

Not only because he set the world record, but because of the way he did it. The Kenyan ran the fastest two laps ever seen, 1:40.91, at the London 2012 Olympic Games, with no pacemakers, leading from the gun to the line.

It was, and still is, his signature racing style.

However, after suffering a knee injury in 2013, a problem that forced him to miss the previous edition of the IAAF World Championships and unable to defend the title he won in 2011, Rudisha has been playing around with his strategy, offering his rivals the opportunity to lead: although in Beijing, no one seemed to take him up on this offer.

Both in the heat and in the semi-final, Rudisha opted for a very conservative start, a relatively modest 54-55 seconds over the first lap.

But no one in the three races in the Chinese capital tried to take the initiative away from the titled Kenyan, condemning themselves to lesser chances to advance to the next round by time and letting Rudisha stay well within his comfort zone all the way.

With 1:48.31 in the first round and 1:47.70 in the semi-final, the Olympic champion had probably spent the least energy of all finalists on the way to the main race.

The fact that his main rivals on paper before the championships, Botswana’s Nijel Amos and Ethiopia’s 2013 champion Mohamed Aman failed to make the final, was a big help as well.

One would have expected a different scenario in the final: one of the athletes taking over from the favourite and ramping up the pace in hopes tire him out, especially given the fact that he was not the fastest in the field this year.

However, Tuesday’s race turned out to closely resemble qualifying rounds.

Rudisha took the lead and settled in at a comfortable pace, clocking 54.17 at the bell.

His compatriot Ferguson Rotich, who beat him at the Kenyan trials, was right on his shoulder with everyone else not far behind.

With 300 metres to go, Rudisha started to switch gears, stretching the chase pack out within a dozen strides.  Rotich was desperately trying to stay close, but Poland’s 2014 European champion Adam Kszczot snuck up on him on the inside and kept charging after the leader.

But Rudisha wasn’t lying when he had said two days before the start of the championships that his famed turn of speed was back.

He was impossible to catch down the home straight.

One of the most consistent runners on the international circuit, Kszczot took the silver medal with a time of 1:46.30.

This medal joins the Pole’s impressive collection, which includes, among others, the world indoor and the European titles from last year, and two European indoor titles from 2011 and 2013.

Rotich spent too much power too early in the race and couldn’t match the signature finishing kick of the 2015 world leader Amel Tuka.

The Bosnian revelation, racing in his first world championships, was again running from way behind.

He was the last at the bell, but moved up steadily from midway along the back straight and clocked the fastest last lap in the field with 51.58 to win the bronze, the first IAAF World Championships medal ever for Bosnia and Herzegovina although he later admitted slightly regretting starting his move a little too late and finding himself with just a fraction too much to do from 80 metres out.

Nevertheless, Tuka has gone from being the 2013 European U23 bronze medallist to third in the world and has improved from 1:46.12 to 1:42.51 over the course of the summer.

His personal best and the world leading time, set in Monaco, have put him on the radar, he has successfully passed the first major level test of his career.

With the three medallists expected to meet again at the IAAF Diamond League final on 3 September, that could be another race to savour.