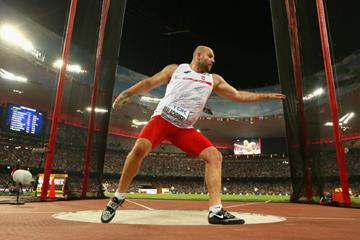 The world leader Piotr Malachowski was the man to beat in the final on Saturday night, but the Pole didn’t leave his fellow competitors a chance, earning his first world title after two silver medal performances in 2009 and 2013.

Two days ago, we saw Malachowski nervous and annoyed after he drove himself into the corner during the qualification with two below-par efforts. Luckily, the Pole was then able to recover and advance to the final.

Tonight in the sector, it was a completely different animal, calm and composed.

Malachowski was the second of twelve finalists to go into the circle in the first round, and he made his mark right away, tossing the discus out to 65.09m.

Even though Jamaica’s Fedrick Dacres and the experienced Estonian and 2008 Olympic champion Gerd Kanter were within one metre of him with 64.22m and 64.82m respectively after the first round, being in the lead seemed to give Malachowski a boost to his confidence.

In the second round, the Pole improved to 67.40m, and remained completely unperturbed even when Belgium’s Philip Milanov, who won the World University Games title last month, improved his national record by 24cm with a 66.90m throw in the third round.

The top two stayed intact until the very end of the competition. Both athletes didn’t get to improve their best marks, but wrapped their efforts up with a few more solid throws.

Malachowski recorded 64.40m, 64.59m and 64.84m in the last three rounds, while Milanov tossed the discus to 65.67m with his final attempt before securing the first ever Belgian medal in this event. He also became his country’s most successful athlete ever at the World Championships, having only claimed a handful of bronzes before.

It seemed like 2007 champion Kanter was on the way to his sixth world championships medal, as he stayed in third with his opening distance up until the fifth round.

However Robert Urbanek, another Pole in the competition and Malachowski’s training partner, made a late surge for the top three.

Coming into his third attempt, Urbanek was in serious trouble. He stood in eleventh with 61.58m, in danger of missing out on an opportunity to continue the fight, but he managed to send his implement to 64.24m to break into the top eight.

In the fifth round, he further improved to 65.18m, to grab the bronze from Kanter, who was unable to respond with his final two throws.

Robert Harting, who captured the last three world titles, as well as the London 2012 Olympic Games gold medal, continues his return to full strength after a knee injury, and wasn’t present in Beijing. However, his younger brother Christoph made a valiant effort to represent the family at the Bird’s Nest stadium and placed eighth with 63.94m.