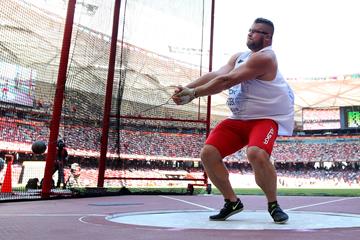 Predictably, it was the in-form defending champion Pawel Fajdek, arguably the warmest favourite of any in any event in Beijing, who topped the qualifiers.

The 2015 world leader, who boasts a proud unbeaten record stretching back to March, will have been mildly irritated by the fact he required two throws before returning to the comfort of his hotel room.

Ambling into the circle for his first throw he maybe took things a little too easy as the hammer crashed into the turf at 76.46m, 54cm shy of the automatic qualification mark.

However, the bespectacled Pole’s second effort of 78.38m guaranteed him a spot in the final and also earned him the kudos of leading the qualifiers, in stark contrast to 2013 when he almost missed out on the final, only going through ninth as one of the better non-automatic qualifiers.

On leaving the circle, and perhaps reflecting on his Moscow qualifying trials and tribulations, Fajdek allowed himself a glimmer of a smile and a brief wave of acknowledgement to the crowd. Job done.

The only other man across the two qualification pools to achieve the automatic standard was Nick Miller. whose first round effort of 77.42m earned him the status of becoming Great Britain’s first ever men’s hammer finalist in the history of IAAF World Championships.

Russia’s Sergej Litvinov, whose father of the same name won the men’s hammer at the first two IAAF World Championships, was the best of the rest with a handy 76.79m.

Among the other prominent qualifiers included Fajdek’s team-mate Wojciech Nowicki (76.72m) and two-time world junior champion Ashraf Amgad Elseify, who is still only 20 and ensured a first Qatari presence in a men’s hammer final courtesy of a third throw of 76.51m.

The London 2012 Olympic Games and 2014 European champion Krisztian Pars, of Hungary, advanced ninth best with a best effort of 75.37m but looked a little out-of-sorts.