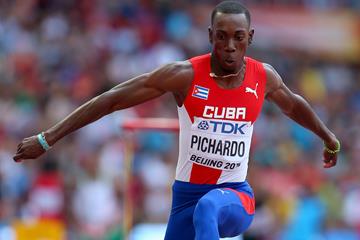 Christian Taylor and Pedro Pablo Pichardo, the triple jump’s celebrity couple of 2015, topped their respective groups in triple jump qualifying on Wednesday morning to advance to Thursday’s final, but not with quite the same authority as they have dominated the event this year.

Taylor and Pichardo have peppered the 18-metre mark throughout the season, which should have made the 17.00m automatic qualifying standard something of an early morning hop, step and jump in the park, even allowing for the traditional dislike of qualifying rounds.

Taking off behind the board, Taylor eventually topped group B with 17.28m after opening with a pretty ordinary 16.77m effort. Ironically, that would have sufficed in the end as the last place in the final went to Bahamian veteran Leevan Sands at 16.73m, but Taylor’s jump looked easy for a man who has reached 18.06m this season.

Pichardo took all three of his jumps. His first-round leap of 16.94m always had him in a top-12 position overall, but he had a second-round foul and, being near the top of the jumping order in group A, apparently decided he had better play it safe.

Play it safe he did, taking off way behind the board on his third attempt but still managing to cut the sand 17.43m away. Having taken off some 26 centimetres behind the board, in terms of actual distance covered, this was probably as close to an 18-metre jump as we saw on the morning.

Only three others got the automatic qualifier. Romanian veteran Marian Oprea, who competed at his first World Championships in Edmonton in 2001, remembered a few things about the event with a 17.07m first-up jump and an early return to the athlete accommodation.

Omar Craddock achieved a 17.01m on his second jump in the same group while in the last round of group B 2007 world champion Nelson Evora of Portugal produced the same distance to give himself a further shot at glory in the stadium where he also won the 2008 Olympic gold medal.

Despite Taylor and Craddock, it was a continuation of the men’s horizontal jumps woe for the USA. Will Claye, bronze medallist at the past two World Championships and silver medallist at the 2012 Olympics, could find no better than a 16.41m jump here and failed to advance.

Marquis Dendy’s first jump saw him land sideways in the sand in the manner of one of those exuberant young men crashing into a beach party in a soft-drink commercial. Dendy is better than that, fortunately, and he got to 16.73m to tie Sands’ best jump but did not advance as he was behind him on best second jump.

So no one in the top eight in the men’s long jump for the US, despite having two finalists, and now just two out of four making the final of the triple jump.

Russian duo Dmitry Sorokin and Lyukman Adams, 16.99 and 16.85m respectively, and France’s European champion Benjamin Compaore, 16.82m, were the only others of the finalists to better 16.80m.