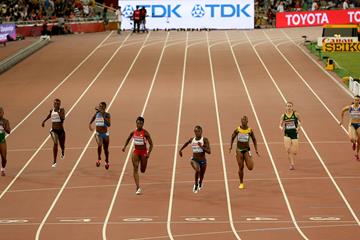 Nineteen-year-old Dina Asher-Smith led the way into the women’s 200m final, running the fastest time in the semi-final round on Thursday night.

Asher-Smith won the third and final semi in a lifetime best and European age-19 best of 22.12, just 0.02 outside the long-time British record set by Kathy Cook at the 1984 Los Angeles Olympics. After running the fastest-ever time in a World Championships first round, the British teen has now run the fastest semi-final.

Jamaica’s Elaine Thompson and Dafne Schippers of the Netherlands won the other two semi-finals to confirm that the event remains one of the most open on the programme. In such an even field with no obvious winner, why could Asher-Smith not go from world junior champion at 100m to world champion at 200m in one year?

In truth, Thompson probably looked the best of the field in winning the first semi-final in 22.13. She had the race under control after an excellent bend and looked to ease down as she went to the line more than a metre clear of Candyce McGrone of the USA, who clocked 22.26.

Bulgarian sprinter Ivet Lalova-Collio ran a personal best of 22.32 for third and there were national records for the next two finishers, Mujinga Kambundji of Switzerland in 22.64, and Viktoriya Zyabkina of Kazakhstan in 22.77.

Lalova-Collio advanced to Friday’s final as one of the two fastest non-automatic qualifiers.

Schippers also looked easy in winning the second semi-final in 22.36, almost two metres ahead of Jamaica’s Sherone Simpson in 22.53. Marie-Josee Ta Lou of Ivory Coast was third in a personal best of 22.56 but did not advance to the semi-final round.

US champion Jenna Prandini was run out in this heat, finishing fifth.

That left only Asher-Smith’s heroics in the third and last semi-final. She was well clear off the bend and held that advantage to the line. But the drama was behind her as Jeneba Tarmoh of the USA and Veronica Campell-Brown of Jamaica went stride-for-stride up the straight.

Tarmoh got the advantage in the last few metres, taking second place in 22.38. Campbell-Brown was third in 22.47, a season’s best, and the two-time Olympic 200m champion, including in this stadium in 2008, got the eighth and last spot in the final.

With Asher-Smith improving to 22.12, that leaves just four hundredths of a second separating the fastest four women in the final on 2015 times. McGrone ran 22.08 to Schippers’ 22.09 at the IAAF Diamond League meeting in Monaco, while Thompson is at 22.10 and Asher-Smith now at 22.12.