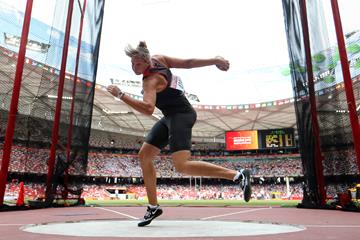 Qualifying for the field events is like a visit to the dentist. You want it all to be quick and painless, but so often it isn’t.

Denia Caballero and Sandra Perkovic, the only two women in the world this year to have thrown beyond 70 metres, led Monday morning’s qualifying competition.

Caballero was given a clean bill of health, a 65.15m throw in the first round of group A well past the automatic qualifying distance of 63m and allowing her to be back in the athletes’ village for morning coffee.

Defending champion Perkovic, competing in group B later in the morning, had a few tricky moments. Her first throw was a mediocre 58.95m and she was compelled to wait through the rest of the first round before a 64.51m second throw put her safely through to Tuesday night’s final.

Melina Robert-Michon, the 2013 silver medallist, took more of the root canal surgery route to the final, requiring all three throws to put herself safely within the top 12. The Frenchwoman’s first effort was an OK 60.23m (which would not have made it), but instead of improving, her second was a modest 57.93m.

Forced to summon more effort than she would have wanted to expend in qualifying, Robert-Michon threw 61.78m at the third attempt to qualify in ninth place overall. Fortunately, the final is indeed another day.

Cuba’s other contender, 67.13m performer Yaime Perez, also required all three throws to get the job done. She was through with a best distance of 62.93m.

Germany will have three throwers in the final. Nadine Muller, fourth in Moscow, went through with her one and only 64.39m effort as did Julia Fischer with 63.38m. Shanice Craft found 62.73m good enough for sixth place overall.

Gia Lewis-Smallwood of the USA, one of the few to be able to boast a victory over Perkovic in the past three years, advanced with a 62.04m effort and will be joined in the final by teammate Whitney Ashley, whose 60.88m was just good enough to squeak through.

Australia’s Dani Samuels, the 2009 world champion, put her first throw into the cage netting but produced 61.87m and 62.01m efforts after that to qualify in eighth place overall.

China will be represented in the final after Su Xinyue qualified in 10th place with a distance of 61.68m while the final spot was taken by Natalia Semonova of Ukraine with 60.72m.

All clear, all through for the top contenders then, though some emerged rubbing their jaws more ruefully than others.