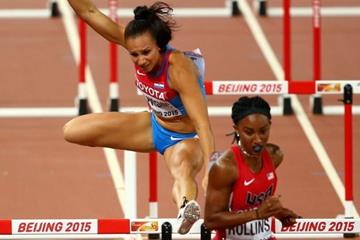 The semi-finals in the women’s 100m hurdles saw two US medal favourites from the leave the track before having a chance to cross the finish line.

One of the most experienced athletes in the field, Dawn Harper-Nelson, failed to finish her race in the first semi-final.

The American got caught up with the second hurdle with her trail leg and fell down hard on the track of the stadium, where she won her Olympic gold medal seven years ago.

With Harper Nelson out of the reckoning, the Jamaican champion Danielle Williams and the USA’s 2015 world leader Sharika Nelvis ran away from the competition to acquire the only two automatic qualifying spots.

In the second semi-final, the USA collegiate champion and the fourth fastest hurdler in the world this season Kendra Harrison visibly false started, was shown a red card and left the track in despair.

When the field did get cleanly away, Great Britain’s Tiffany Porter was powerfully out of the blocks and precise over the hurdles in a solo run towards the victory in this heat.

The 2013 world championships bronze medallist confirmed her serious intentions with a swift time of 12.62 (-0.4 mps).

In the last heat of the semi-finals, the defending world champion Brianna Rollins had a surprisingly close battle with Croatia’s Andrea Ivancevic over the first five hurdles.

Ivancevic, who posted her first ever sub-13 time earlier this year, managed to keep up with the speedy American for the first half of the race.

However, the quick start took its toll on Croatian’s technique. She clipped the ninth hurdle, losing her rhythm, and then stumbled over the last barrier, falling on the track.

Rollins was unfazed, gaining a confident victory in 12.71 (-0.8 mps). Jamaica’s Shermaine Williams took second in 12.86, joining her younger sister in the final.

In tonight’s semi-final, six automatic qualifiers will be joined by the European champion from Belarus Alina Talay, who equalled her personal best of 12.70 for third place in the first heat. The other qualifier by time is Switzerland’s Noemi Zbaren, who finished third in the second semi-final in 12.81.