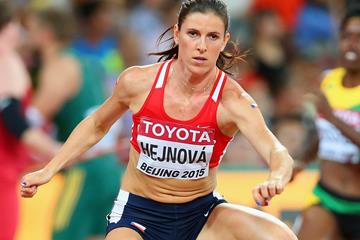 The fastest time in the semi-finals was set by the defending champion Zuzana Hejnova in the last heat. The Czech chose to start conservatively, which helped her to have a smooth and even race, and she looked effortless before crossing the line in 54.24.

According to the qualifying formula for the semi-finals, only the first two athletes guaranteed themselves a lane in the final, while others had to wait and see if they could join them by times.

The fastest woman in the heats, USA’s Cassandra Tate, once again decided to take the initiative in her race.

She led through the first six hurdles, but slowed down on the last bend, allowing Elidh Child and Wenda Nel to pass her.

However, Tate found another gear after the tenth hurdle, quickly made the ground on the competition, and jogged through the line in 54.33.

In the battle for the second automatic qualification sport, between Child and Nel, the South African was stronger. Nel’s time was 54.63 against Child’s 54.80.

The following semi-final played out according to a similar scenario.

The 2014 Commonwealth Games champion Kaliese Spencer was in a clear lead through the first half of the race, but slightly lost her rhythm coming into the seventh hurdle. The Jamaican then had to work a little harder than she would probably have liked to stay on top.

In the last few metres, Spencer let Denmark’s Sara Petersen pass her but at that point, this duo was under no threat.

USA’s 2014 world junior champion and 2015 world leader Shamier Little, still only 20 and running in lane two, looked a bit tired after a long season which included winning the American collegiate and US titles and came third in 54.86.