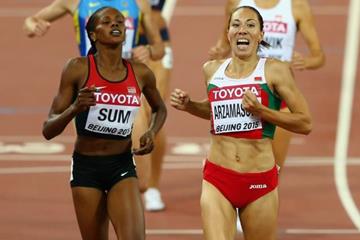 Kenya’s defending champion Euince Sum ended up having to settle for the bronze medal on this occasion after a tense and enthralling three-way battle down to home straight as  Marina Arzamasova returned the world 800m title to Europe on Saturday.

Sum came to Beijing after a six-race unbeaten streak this season, but she was beaten in her semi-final race, showing signs of vulnerability, when Canada’s Pan American Games champion Melissa Bishop and the 2014 European champion from Belarus out-sprinted her on the homestretch.

However, in the final, the Kenyan chose to follow a similar race pattern, leading from the gun, and perhaps it proved her undoing.

The only thing she did differently was starting a little more conservatively, at 59.1sec over the first 400m versus 57.4 two days ago as she, probably, tried to conserve more energy for her finishing kick this time.

However, at this pace, her rivals had no problem staying with Sum.

Morocco’s Rababe Arafi was a few metres behind the pack for the half of the first lap, but quickly moved back up, joining the rest of the finalists in contention for the medals.

In the meantime, Sum stayed in the lead.

The Kenyan slightly picked up the pace after the bell, but Arzamasova, Bishop and France’s Renelle Lamote stayed on her shoulder, almost exactly like in her troublesome semi-final heat.

The key events in the race unfolded on the last bend, as the Belorussian powerfully moved forward and overtook the lead.

Most importantly, after making her move on the outside of Sum, Arzamasova managed to cross to the inside, quickly and safely, without risking on getting herself into a collision.

Sum had no space in front of her to quickly respond to Arzamasova’s move. The Kenyan tried to go wide, but this only opened the inside to Melissa Bishop, who had plenty of energy for the finishing spurt.

In her desperate dash to the finish line, Sum couldn’t match her rivals’ pace and finished third in 1:58.18.

The resemblance to the semi-final race, however, wasn’t complete, as tonight Arzamasova was in charge, clocking 1:58.03 for the win, while Melissa Bishop finished second in 1:58.12 after clocking the fastest second lap in the race at 58.73.

The Belorussian added the world title to her European title and the world indoor championships bronze medal from 2014, while for Bishop this silver is her first success on a global stage.

Both Arzamasova and Bishop won the first ever world championships medals in the 800m for their respective countries.