French hurdler Wilhem Belocian provided the individual highlight of the 2013 European Athletics Junior Championships, staged in the Italian town of Rieti, whose four days of action came to an end on Sunday (21).

The IAAF 2012 World Junior Championships 100m Hurdles bronze medallist produced a superb demonstration of hurdling to clock 13.18 and dash the host nation’s hopes of a gold medal in the event, leaving Lorenzo Perini having to settle for second in 13.30 while Switzerland’s Brahian Pena came home third in 13.31; both men also setting national junior records and running inside the former championship record of 13.32 which the Italian had set in his heat.

"I just ran better than the others," said Belocian afterwards. "Better than the Italian and the Swede. I also broke the European record which is awesome."

Russia's 400m hurdler Timofey Chalyy also clocked a championship record after speeding to his gold medal in 49.23, winning from his team mate Aleksandr Skorobogatko by 0.9.

Chalyy ran the joint second fastest time by European junior in his event and also improved the Russian junior record.

Events with barriers generally seemed to produce thrilling races throughout the championships.

Switzerland’s Noemi Zbaren delighted her loud army of scarlet-clad fans, adding the European junior gold to her World Junior and World Youth silver medals when she scorched home in 13.17, just 0.08 outside the championship record.

Finland’s Oona Kettunen also produced a well-judged piece of distance running when she romped home in the women's 3000m Steeplechase in a national junior record of 9:45.51, then later in the week took silver in the 5000m.

The men’s 10,000m was the third event where a championship record was set, Turkey’s Kenyan-born Ali Kaya running away with the race on Thursday to win in 28:31.16, finishing almost a minute in front of his nearest rival.

However, the final lap still had a moment of drama as on the preceeding lap Kaya had passed a group of three runners battling for the minor paces on the podium before hearing the bell.

Russia’s Mikhail Strelkov then started to race with Kaya, clearly unaware that he was about to be lapped and believing that the bell was for him as well.

The luckless Russian realised his mistakes after crossing the line and coming to a dead halt before being ushered on by officials and he jogged around for fourth place.

Kaya then completed his double two days later by winning the 5000m with another solo run from the gun in 13:49.76.

A number of this year’s European junior medallists will be eligible for next year’s World Junior Championships in the US town of Eugene. Two women in particular will have been installed as long-range favourites for their events in Oregon: Iceland’s middle-distance runner Anita Hinriksdottir and Turkish shot putter Emel Dereli.

Victorious from Donetsk to Rieti

Both women won at the 2013 IAAF Youth Championships in Donetsk a week ago and followed up their victories in Ukraine with continental crowns.

The 17-year-old Hinriksdottir won a historic first European junior gold medal for her country in familiar, if somewhat ungainly, style.

She adopted her usual front-running tactics and held just enough back to stay ahead of her courageous challenger Olena Sidorska in the home straight, crossing the line in 2:01.14 to leave the Ukrainian with the silver medal in 2:01.46.

Dereli, who seems equally at home with the 4kg shot as the 3kg youth implement, led from the second round and ended her campaign with 18.04m, 37cm beyond her own national record and moving her into the top 10 on the world youth all-time list with the senior weight Shot.

Great Britain, a traditional powerhouse at the championships, topped the medal table for the first time since 1993 thanks to getting nine gold medals, one more than Russia, although the latter did acquire 22 medals overall in comparison to Britain’s record haul of 19 places on the podium.

At one point the British national anthem was heard three times on Saturday in less than 15 minutes, and four golds were won within an hour, reminding many people of a particular Saturday last August at the London 2012 Olympic Games when Greg Rutherford, Jessica Ennis-Hill and Mo Farah won gold medals in short succession.

He was followed swiftly by Dina Asher-Smith, who won the women’s 200m in 23.29, and led 2011 World youth champion medallist Desiree Henry to an impressive one-two.

The pair also formed half of Britain’s 4x100m Relay team on Sunday which won in a national junior record of 43.81 but their earlier feat in the 200m was quickly topped by their male team mates, who took a clean sweep of the medals in the same event, led home by Nethaneel Mitchell-Blake, who clocked 20.62 to finish ahead of his compatriots Leon Reid and Matthew Hudson-Smith.

Emelia Gorecka rounded off the British winning streak on the penultimate day in style in the women's 3000m when she finally bagged her first junior track title at her last ever junior championships, having won two European junior cross-country titles in the past and a bronze medal at the World Junior Championships last year.

Gorecka's was an emphatic victory as she dominated the final to win by more than 13 seconds in 9:12.53.

Armenia’s Levon Aghasyan, advised by European Long Jump record-holder Robert Emmiyan, bounded out to 16.01m in the third round of the Triple Jump, held in damp conditions after a downpour of Sunday afternoon, and no one could top that mark.

Bosnia’s Mesud Pezer came into the Shot Put as the best European junior but had to come from behind to win.

Lying third at half way, Pezer eventually took the lead in the fifth round when he reached 20.26m to edge in front of Croatia’s Filip Mihaljevic before sending his sixth effort out to 20.44m to break his own national junior record by four centimetres.

Belgium's brilliant heptathlete Nafissatou Thiam not only smashed her own national junior record but took Tia Hellebaut's senior record too with a total of 6298 points.

"My main target this year was to win a medal in Rieti," said Thiam. "Plus, I broke Tia's national record so I am more than happy.

"I will probably go to Moscow [for the IAAF World Championships] but as I said my main goal was Rieti. I am glad I could win and not succumb to the pressure and expectations of others,” said Thiam.

The Decathlon gold went, slightly unexpectedly, to Russia’s Yevgeniy Likhanov, who had eight personal bests in the 10 events – including raising his High Jump best from 2.02m to 2.13m – with a personal best total of 7975 points to win by 185 points from his more-favoured compatriot Aleksay Cherkasov.

One Russian who did fulfil his role as pre-event favourite was 400m hurdler Timofey Chalyy who sped to his gold medal in 49.23, winning from his team mate Aleksandr Skorobogatko by 0.9.

Both 400m races were subjectively judged by many to among the best events of the four days.

Pavel Ivashko became the first Russian to win over one lap of the track as he led from start to finish and clocked a national junior record of 45.81 while Patrycja Wyciszkiewicz broke her own Polish junior record to defeat Romania’s defending champion Bianca Razor in a hotly contested women's final.

Wyciszkiewicz came off the final bend trailing Russia's Ekaterina Renzhina but powered away down the home straight to clock 51.56, taking more than half-a-second from her personal best.

Razor was aiming to become the first woman ever to retain the European junior 400m crown after winning in Tallinn two years ago but the Romanian, entering the home straight third, had to be content with silver despite a personal best of 51.82.

Both Ivashko and Wyciszkiewicz then produced stirring anchor legs in the 4x400m Relays to bring gold to Russia and Poland in respective national junior records of 3:04.87 and 3:32.63.

It is impossible to adequately mention all 44 winners in Rieti but perhaps the final word should be reserved for the athlete that got the biggest cheers of anyone in the Raul Guidobaldi Stadium that annually hosts the famous IAAF World Challenge meeting where many World records have been set, Italy’s Ottavia Cestonaro.

Cestonaro leapt from from sixth to first with her final effort of 13.41m to snatch the Triple Jump gold medal from Romania’s Elena Panturoiu, who had led from the second round with a personal best of 13.36m, and give the host nation their only gold medal.

"I have demonstrated to myself and to everyone that I can do whatever I want," said the delighted Cestonaro on Friday, before dedicating the medal to her grandmother who passed away last year. "I have jumped for her this afternoon." 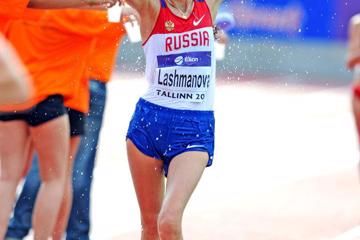 Records fall and a fantastic finale in Tallin...