Ethiopian double victory despite the smog at the Beijing Marathon

Ethiopia's Girmay Birhanu and his compatriot Fatuma Sado took the honours at the 34th Beijing International Marathon, an IAAF Gold Label Road Race, winning respectively in 2:10:42 and 2:30:03 on Sunday (19).

Birhanu, as the fastest man in the field with a best of 2:05:49, fulfilled his role of favourite and won his first race over the classic distance after four second-place finishes in his eight marathons to date.

He became the third successive Ethiopian man to win the race. By contrast, Sado was the first overseas women's winner since Great Britain's Deborah Noy in 1991.

The race started in Tiananmen Square and there were seven runners in the men’s lead pack after 10km. Over the course of the next 5km, that number dwindled by two as Kenya’s Samuel Maswai led the way through 15km with 44:55.

As Maswai weakened, the lead group was joined by Kenya’s Solomon Bushendich and a five-man group reached reached 30km in 1:31:39.

Shortly after 30km, Degefa tried to break away from the group as Barngetuny briefly dropped back but they soon regrouped and at 35km the same five runners were still together with Birhanu now leading in 1:47:53.

However, immediately after this point as the runners entered the park section of the race, Birhanu and Degefa broke free and opened a big gap in just a few minutes.

Only Bushendich was able to keep a direct view of the duo, but he too lost the race in the park.

Birhanu and Degefa were side by side until the last 500 metres in the Chinese capital's Olympic Park, when the former accelerated to win his first ever race on Chinese soil in 2:10:42.

Degefa finished second in 2:10:54 as Bushendich just held on for third in 2:11:07 as the fast-finishing Barngetuny clocked the same time in fourth place, a personal best for the latter.

Sado adds to her successes

The 23-year-old had won the 2012 Los Angeles Marathon and the 2013 Xiamen Marathon. Her 24-year-old countrywoman Meseret Kitata finished in second place in her second career marathon in 2:31:08, exactly the same time as her winning debut in Marrakech back in January.

The race has also grabbed international headlines because many of the estimated 30,000 participants - although none of the elite field - in the marathon and adjacent half marathon were running with face masks to combat a blanket of smog which had descended.

The marathon's organising committee said late on Saturday that postponing the event would be difficult because of all the planning that had gone into it, and asked competitors to understand, which generally seemed to be the case.

There were few grumbles from the elite runners. "Today the smog did have a little impact on my performance, but not a major one," commented third-placed Gong.

However, the environmental conditions deteriorated on Sunday morning sufficiently for Beijing's environmental centre to issue a warning to suggest children and the elderly stay indoors.

BACK
Pages related to this articleAthletes
Fatuma Sado 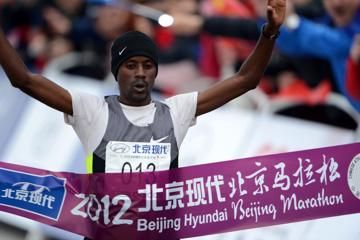 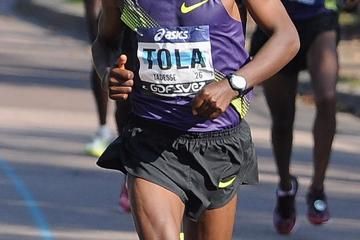