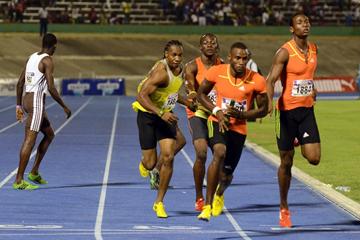 Blake, the 2011 World Championships 100m gold medallist, ran the finals of both the men’s 4x100m and 4x400m, while Bolt's presence was only required in the preliminary round of the longer event.

Bolt’s coach Glen Mills told journalists after the final that, “Bolt was only down to run the heats.”

In the final, Yohan Blake ran the anchor and collected the baton some five metres behind but did well to take Racers Lions close to the winners Racers Tack Club, the two teams clocking 3:04.00 and 3:03.74 respectively. London 2012 Olympic Games 200m bronze medallist Warren Weir ran the third leg for Racers Lions.

“I just wanted the baton a little bit earlier and he (Racers Track Club anchor Edino Steele) would have been beaten. But in the end it was good, especially since I don’t run the 400m a lot,” reflected Blake.

Steele said it was all about fun. “The Beast (Blake) pushed me and it goes to show that anyone on our team can run a good quarter (400m). We don’t train to run in February, we train for June, July and August, so expect us to run faster later in the season.”

In the men’s 4x100m, Blake ran the third leg before handing over for Kemar Bailey-Cole to take Racers Lions home in 38.50.

Williams, who got the baton some 15 metres back on anchor leg,  ran a outstanding hand—timed split of 44.8 for his team Munro College to win the high school boys 4x400m in 3:11.43.