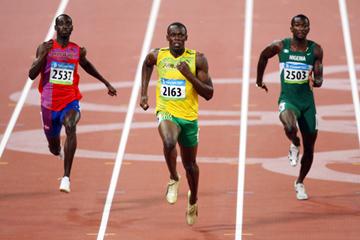 Bolt, Blake and Fraser-Pryce all beaten over 400m in Kingston

Usain Bolt, Yohan Blake and Shelly-Ann Fraser-Pryce were all beaten in test runs over 400m at Saturday's UWI Invitational Meeting in Kingston, Jamaica, on Saturday (23).

London 2012 Olympic Games 100m and 200m champion Bolt, in his third low-key local meeting of the year, was in contention up to the last 350 metres of his race but lost out to  Nicholas Maithland.

Bolt, who was also the 2012 World Athlete of the Year, crossed the line in 46.44 but finished well behind Maithlan, who was the fastest man of the day in 45.79.

Blake, who ran in the final heat, got a personal best of  46.33 but came home behind Allodin Fothergill, who clocked 46.24.

Blake said he was happy with the personal best but had to battle with a strong wind. "I would have gotten a faster time, but I still have to give God thanks. I'm running some good times in the 400 so I'm right where I'm supposed be (preparing for IAAF World Championships this summer)."

Fraser-Pryce, the two-time Olympic Games 100m champion, was fifth in her race in the modest time of 56.63. However, she was far from worried. "The aim and intention is always to go out there and do my best, get a personal best if possible."

Rosemarie Whyte, a specialist 400m runner, won the race in 52.34 with Sherone Simpson, better known as a sprinter over shorter distances, second in 53.65.