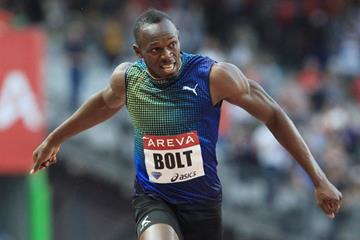 The organisers of the Paris IAAF Diamond League meeting saved the best for last as Usain Bolt uncorked a world-leading 200m in 19.73 on Saturday (6), the fastest ever run over half-a-lap of the track in France, in the final event of an entertaining night.

Bolt was the man that most of the capacity crowd of more than 52,000 athletics fans in the Stade de France had come to see and he didn’t disappoint despite his usual almost-sluggish start which saw him be the second-slowest man in the field out of his blocks.

He had a slight lead over his compatriot Warren Weir coming off the turn, before pulling away from the London 2012 Olympic Games bronze medallist down the home straight.

Weir didn’t throw in the towel and ran 19.92 for second place, the third-fastest time of his career, while France’s former European champion Christophe Lemaitre finished third in a season’s best of 20.07.

“I love Paris, I always feel wonderful here. As you see, I’m getting there,” said Bolt, clearly still sensitive about the criticism he suffered earlier in the season immediately before and after his surprise 100m defeat at the IAAF Diamond League meeting in Rome.

“I still need to work on a few mistakes, my coach will determine what exactly it will be. It’s all building up towards a great World Championships. You will see a big show there, it will be the climax and I want to be ready for that,” added the 100m and 200m World record-holder.

However, Bolt had to run fast if he was to steal the headlines from three runners who had produced great feats earlier in the evening at a meeting which saw four world-leading marks for the year.

James and Merritt give the crowd an early thrill

A great head-to-head race in the men's 400m between Grenada's Olympic and World champion Kirani James and his US predecessor LaShawn Merritt was predicted and so it proved, as the pair spurred each other on to outstanding times.

James edged in front at 150 metres but Merritt never stopped pressing him.

The result was that James had to dig deep to produce the second-best time of his career in 43.96 and Merritt came home in 44.09, his best time since he won the 2009 World title.

“Today, in comparison to previous races, I had a bit better first 200m. I couldn’t let LaShawn go in the early stages of the race otherwise it would have been too much to beat him,” reflected the ever modest James.

For good measure it was the seventh-fastest run ever over the distance.

A fast time was assured after the US pacemaker Gabriele Anderson took the leaders through 2000m in 5:45.20. When she dropped out, Dibaba and her compatriots Gelete Burka and Almaz Ayana were a long way ahead of the rest of the field but the two-time Olympic 10,000m champion went to the front in the third kilometre and the pace dropped slightly as 3000m was reached in 8:40.53.

Ayana pushed the pace for another 700m and Dibaba, taking the lead with just over three laps remaining and despite visibly accelerating at the bell, could not get rid of the dogged Ayana until she kicked again with 300 metres to go.

Ayana, best known before Saturday as a steeplechaser, had the race of her life and took more than 27 seconds off her best when coming home as the runner up in 14:25.84.

The men's 3000m Steeplechase fulfilled its promises to be a thrilling battle between Kenya's 2012 Olympic champion Ezekiel Kemboi and his compatriot Paul Koech along with France's double Olympic silver medallist Mahiedine Mekhissi-Benabbad.

The trio were together at 2000m when the pacemaker Haron Lagat dropped out and the clock read 5:21.10.

Koech then led for the next 600m but at the bell, the Frenchman, to the massive roars of the crowd, went to the front.

However, Kemboi is a dangerous man on the last lap and took the lead at 250 metres with three barriers remaining and never relinquished his lead before coming home in 7:59.03, the first time under eight minutes this year and a meeting record.

Indeed, he might even have gone slightly faster were it not for some familiar show boating about 20 metres from the line, drifting into the second lane with his arms held wide.

Mekhissi-Benabbad held his form to set a European record of 8:00.09, an improvement on the former continental standard of 8.01.19, which had been held since 2009 by his compatriot Bouabdellah Tahri.

She was clearly ahead after just three hurdles and powered her way home in a national record of 53.23.

Great Britain's Perri Shakes-Drayton, on Hejnova’s immediate inside in the second lane, was towed to a time of 53.96 in second place.

Burundi's Francine Niyonsaba, sixth at the Olympic Games last summer and still just 20, is the fastest 800m runner in the world this year with 1:56.72 and her talent showed as she hit the front with 50 metres to go, going around the USA’s Alysia Montano to win in 1:57.26, a time only she has beaten this year.

Morocco’s Malika Akkaoui followed in Niyonsaba’s footsteps as Montano weakened to finish second in a personal best of 1:57.64, with the US champion third in 1:57.75.

After his impressive Dream Mile win in Oslo last month, Djibouti's emerging talent Ayanleh Souleiman showed that he could be the man to watch at the World Championships as he goes in search of his country’s first medal since 1987.

He had a gripping battle with Ethiopia’s Aman Wote over the final 300 metres and all the way to the line but had the strength to prevail in 3:32.55 with Wote just 0.1 behind in a personal best of 3:32.65.

Wote was one of just four men in the top eight to set personal bests.

Jamaica's two-time Olympic 100m champion Shelly-Ann Fraser-Pryce is starting to get into her stride as the World Championships approach and produced a season’s best of 10.92 to win over her favourite distance.

Fraser-Pryce hit the front at 45 metres but had to resist a late charge from Nigeria's Blessing Okagbare, two lanes to her right, who was just edged out and finished second in 10.93.

If Fraser-Pryce’s win was reasonably predictable, there was an upset win in the men’s Long Jump when another Jamaican, Damar Forbes, won with 8.11m.

Admittedly, Forbes had recently jumped 8.25m to win his national title in Kingston and also took the prestigious and high-quality American collegiate (NCAA) crown but he was almost an unknown quantity internationally after failing to qualify for the final at the 2011 World Championships and 2012 Olympic Games.

Forbes flew out to 8.11m with his second effort and for good measure jumped 8.09m in the following round, both jumps into gentle headwinds.

His nearest rival was Great Britain’s Chris Tomlinson, who jumped 8.08m a little earlier in the second round to very briefly take the lead.

The still wind conditions didn’t provide much help for the Discus throwers but Germany's Olympic and World champion Robert Harting is a man for all seasons.

He took the lead straight away with 64.97m, extended his advantage with 66.80m in round three and threw 67.04m with his penultimate effort.

The best of the rest was Iran’s 2012 Olympic Games silver medallist Eshan Hadadi, who reached 65.53m in the fourth round.

Harting now leads the Diamond Race with eight points but with three competitions remaining, the contest is still wide open.

Russia's Olympic and World champion Anna Chicherova showed her competitive mettle when she was the only woman to scale 2.01m.

Chicherova, Croatia's Blanka Vlasic, and US champion Brigetta Barrett were the only women over 1.95m, a height all three managed on their first attempt.

Barrett, who scaled a personal best and world-leading 2.04m when winning her national title in Des Moines two weeks ago, then went over 1.98m at the first time of asking while the other two both needed two attempts. But when the bar went up to 2.01m, only Chicherova managed to clear it, recording her 40th competition at 2.00m or higher.

France's 2012 Olympic and European champion Renaud Lavillenie bounced back after his disappointing showing in Lausanne on Thursday, when he failed to clear a height, and went clear with his first attempts all the way up to 5.92m before three failures at a would-be meeting record and French outdoor best of 6.02m.

A distant second was Czech Republic’s Jan Kudlicka at 5.70m.

In the women's Javelin, Germany's Christina Obergfoll only needed two throws to extend her unbeaten season to seven victories and tighten her grip on the Diamond Race after four straight wins.

She threw 64.74m in the first round and then 62.82m before passing her remaining four throws in order to conserve her strength as she will make a made dash back over the border to Ulm to contest the German championships on Sunday.

However, the gamble almost failed to pay dividends as Australia’s Kimberley Mickle, who was secure in second place after three throws over 63 metres earlier in the competition, launched her spear out to a personal best of 64.35m with her final throw.

Colombia's Caterine Ibarguen's decision to give this weekend's South American Championships on home soil a miss proved to be a profitable one.

After Hanna Knyazyeva had bounded out to an Israeli record of 14.58m, which proved to be good enough for second place, the 2012 Olympic Games silver medallist responded with a winning leap of 14.69m two rounds later to win her fourth straight Diamond League outing and stand on top of the Diamond Race standings with 16 points.

The first 110m Hurdles race in less than 13 seconds this year didn’t materialise but that didn’t wipe the smile off the face of the World record-holder and 2012 Olympic champion Aries Merritt who ran a season’s best of 13.09 to confirm he’s over the hamstring problems which marred his season for several weeks after the Diamond League meeting in Shanghai seven weeks ago.

Merritt reacted fastest to the gun but there was almost nothing to choose between him and his nearest challengers – Barbados’ 2009 World champion Ryan Brathwaite and emerging local talent Pascal Martinot-Lagarde – through the entire race.

The 21-year-old Frenchman came through for second in a big personal best of 13.12, an improvement of 0.19, while Brathwaite was third in 13.14, equalling his own national record set when winning his World title in Berlin four years ago.

New Zealand's 2012 Olympic Shot Put champion Valerie Adams comfortably notched up her 36th consecutive victory when she threw 20.62m to win by more than a metre.

Adams opened with 20.12m, reached 20.60m with her second effort and then improved further to 20.62m in the fourth round, her only three valid attempts.

Michelle Carter, who produced a recent US record of 20.24m, was Adams’ nearest rival with 19.57m.