Caroline Rotich and Lelisa Desisa won the Boston Marathon titles on Monday (20) in the 119th running of the IAAF Gold Label Road Race. Rotich’s victory was the biggest race of her career to date, and Desisa returned to put good memories in place of bad ones from the race he won in 2013.

Caroline Rotich left her victory much later than Desisa, as yet again Boston’s women’s race came down to the final strides on Boyleston Street. This time the duel was Rotich and Mare Dibaba, with Buzunesh Deba, last year’s second-place finisher, left behind only as the trio made the first of two corners in the race’s closing stages, within a kilometre of the finish.

Dibaba seemed to have the upper hand, but Rotich found another gear and was able to pull away in the last strides, putting four seconds on Dibaba in what seemed like the last inches. Rotich finished in 2:24:55 after passing halfway in 1:12:45. Dibaba was four seconds back in 2:24:59, and Deba another 10 seconds adrift in 2:25:09.

“I swung wide,” Rotich said of her move on the final corner, “and I thought, ‘we’re so far away, I can’t see the finish line’. So I fell back, but then I saw the finish line, and I came back and had to give all the strength I had to reach the finish line.

Dibaba, the current world leader with her 2:19:52 run in Xiamen, admitted: “I was confident that I could win, but at the end I saw I would have to settle for second.”

Desisa, the 2013 world silver medallist, hadn’t won a marathon since his victory two years ago in Boston. After his runner-up finish in Moscow, Desisa did not finish here in 2014, and then lost a close duel with Wilson Kipsang in New York City last autumn.

After yet another second place in Dubai this January, in Boston the only ‘second’ about Desisa would be ‘second victory’. His finish time of 2:09:17 was faster than his 2013 victory – that year he won in 2:10:22 – and his fastest time outside of Dubai.

With overcast skies, occasional spitting rain and wind in the runners’ faces in several sections, nobody was anxious to lead the pack or push the pace. Desisa had no issues staying in contact, constantly present amid a lead pack which numbered more than a dozen until late in the race.

Ten men crested the high point of ‘Heartbreak Hill’ in Newton together, and only then in the ensuing descents did the pack start to break up for good. The pack thinned to three, 2012 champion Wesley Korir, Desisa and Ethiopia’s Yemane Tsegay.

By the next mile, as the course passed through Brookline, Desisa was able to break up even that small pack, with Korir expiring rapidly (he fell back to fifth in the closing two miles). Tsegay hung on longer, closing the gap on Desisa more than once but unable to deliver the coup de grace.

After 2013, Desisa returned his winner’s medal to the City of Boston when he came back to run the BAA 10K in July, but it wasn’t until today that he was able to replace it. He was visibly elated at the finish, and immediately turned to run back down Boyleston Street to thank the many spectators from a city which has treated him better than any other now.

“I knew I would need speed for the last mile,” Desisa explained to the press afterwards in hesitant English. “I knew I had the kick. I had confidence that I could win after 10km, because I saw the race would not be fast. When we came down the hills I started to surge so I would not have to kick.

“For us, this race is big, big, big,” added Desisa, speaking for all the Ethiopians in the lead group.  Three Ethiopians have won the Boston Marathon in this century, with Desisa the first to win a second time.

Tsegay, the 2012 Rotterdam champion in 2:04:48, has won in Eindhoven, Daegu and Ottawa since then, but was making his first appearance in Boston. “The race today was very difficult,” he reported. “Through halfway we were fast, but in the second half the wind picked up.”

Defending champion Meb Keflezighi was eighth in 2:12:42. Keflezighi stuck with the pack through 35km but then had to drop off. “I thought I had a shot at it,” he explained. 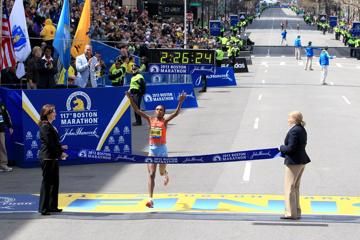 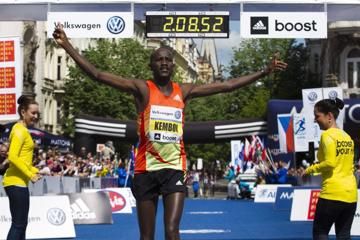 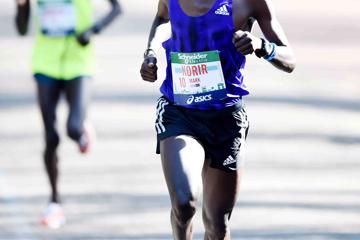 Korir gets biggest win of his career with Par... 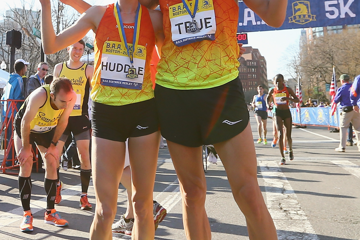 Huddle and True set US 5km records in Boston...