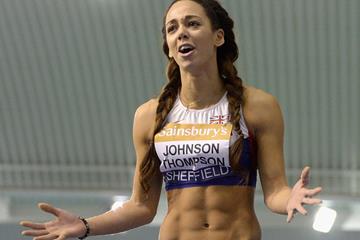 Johnson-Thompson, the world’s leading heptathlete in 2014, led the competition with first-time clearances up to and including 1.91m. After needing three tries at that height and the preceding 1.88m, Lake then went clear at 1.94m – a British junior indoor record – on her first attempt to take the lead after Johnson-Thompson got over it on her second try.

But as the bar went up to 1.97m, Johnson-Thompson regained the lead with a first-time clearance to set an outright British record, adding one centimetre to her own national indoor best set at this meeting last year.

Lake bowed out with three unsuccessful attempts at that height, while Johnson-Thompson went on to have three attempts at 2.00m.

“I’m glad to jump a PB but I can’t believe I’m a little disappointed to jump 1.97m,” said Johnson-Thompson after her first high jump competition of 2015. “I’m glad to jump it on the first attempt though with space. I think it is the big 2.00m on the board which puts you off a little bit. It’s been a while since I’ve done the high jump so it’s good to get into competition.”

Johnson-Thompson went on to finish fourth in the 60m hurdles in a PB of 8.25. The title went to Serita Solomon, who clocked a PB of 8.04.

Chijindu Ujah also booked his place on the team for the European Indoor Championships with a convincing victory in the men’s 60m. The European junior champion cruised through the rounds and won the final in 6.57. Silver went to Ujah’s training partner Sean Safo-Antwi in 6.66.

“I stumbled a little bit at the start and looked up at the clock at the end to see what the time was like but I’m happy with that,” said Ujah.

World junior 100m champion Dina Asher-Smith stormed home to take the 60m title. The 19-year-old clocked 7.15 in the final, having run 7.14 in the semi-final.

“I’m feeling really good,” she said. “I was hoping to run a faster time but I’ve had the flu.”

“I went off way too quick!” said the current world leader. “I was a bit shocked at how fast I ran the first 400m so I backed off but then that made me lose momentum so I should have had more faith in myself to carry on at that pace.”

Abigail Irozuru added 29 centimetres to her indoor PB to win the long jump with a leap of 6.73m. In the men’s event, Dan Bramble improved on his second-place finish from last year with a last-round PB of 7.90m to finish just three centimetres ahead of Julian Reid.

Olympic finalist Lawrence Clarke continued his impressive run of form in the 60m hurdles. The 24-year-old clinched the title in 7.69, with world junior bronze medallist David Omoregie securing silver in 7.78, having clocked a PB of 7.71 in the rounds.

European under-23 bronze medallist Allan Smith booked his place on the European Indoor Championships team by adding four centimetres to his PB to win the high jump with 2.29m.

There was drama in the women’s 400m as the two race leaders, Seren Bundy-Davies and Margaret Adeoye fell with 60 metres to go. It left the door open for Kirsten McAslan to come through and take gold with a personal best of 53.05.

British Athletics and Jon Mulkeen for the IAAF