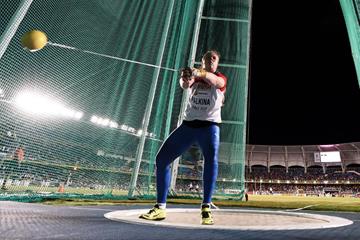 However, clearly off of the 71-metre form that brought her to Cali, Galkina found herself under pressure throughout the competition.

China’s Shang Ningyu was closest midway through the competition with a throw of 66.84m, a lifetime best from round three. Turkey’s Deniz Yaylaci, meanwhile, also appeared to be well within striking distance after her opening 65.56m throw.

For a brief moment, it even appeared that Yaylaci would steal the competition when her final throw appeared to land beyond 67 metres. It did, at a personal best of 67.01m to be precise, but still a bit short to overtake the heavily favoured Russian.

“I was very scared because this was my first big competition so I was excited about it too,” said Palkina, who arrived in Cali with the three farthest throws of the season: 71.68m, 71.62m, and 71.54m.

“Even though I wasn’t able to make a better throw, I just feel great right now.”

Both Palkina and Yaylaci thanked the vociferous crowd, certainly the largest they’d ever competed in front of, and one that has been growing ever more appreciative and engaged in the field events as the days pass in Cali.

“I really want to thank the crowd,” said Yaylaci. “They helped me do something extraordinary."

Shang’s 66.84m effort held on for bronze, surprisingly the first medal in the event for China considering their strong performances at senior level.