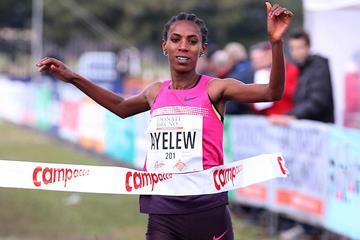 Rop and Ayalew run away with Campaccio titles

Rop, who set a Bahraini record and Asian junior record of 12:51.96 for 5000m last summer, started pushing hard in the early stages of the race, going through the first kilometre in 2:49, followed by Merga and 8:03 steeplechase runner Jairus Birech. They formed the leading quartet together with Italian 3000m steeplechase champion Jamel Chatbi.

They went through 2km in 5:49, closely followed by Korir, Kenneth Kipkemoi and world 3000m steeplechase silver medallist Conseslus Kipruto, who clawed his way back after a conservative start.

At 3km, Birech, Rop, Korir, Merga and Kipkemoi surged away from Kipruto, opening up a five-second gap over the Diamond Race winner.

Kipruto closed the gap, catching up with the five-man leading group at the 5km mark which was reached in 14:21. But by 8km, Kipruto’s effort to catch up with the leading pack took its toll and the teenager was dropped by six seconds, 22:54 to 23:00.

Rop pushed the pace, running at the front from the start of the last lap and pulling away from Merga and Korir. The 19-year-old then kicked away in the back straight with 300 metres to go.

He romped home in 28:19, three seconds ahead of Korir, the youngest ever senior’s men world cross-country champion at the age of 19 last March in Bydgoszcz and winner of the recent IAAF Cross Country Permit meeting in Antrim last Saturday.

“It was a hard race against strong rivals,” said Rop, who finished runner-up at the IAAF Cross Country Permit meeting in Brussels last month. “I tried to push at the start of the race but I could not break away from my rivals.

“In the middle of the race I saved my energy for the final sprint before pushing on the last lap,” he added. “I am planning to run indoors with the goal to run at the IAAF World Championships in Sopot.”

“I am proud to add my name to the long list of stars who have made the history of the Campaccio,” said Rop.

After clocking 3:30 for the first kilometre, Masai continued to run at the front ahead of Belete, Ayalew, Teferi and Chepkoech and they passed the 2km mark in 6:47, eight seconds ahead of world steeplechase champion Milcah Chemos, who was in seventh.

The leading group was whittled down to just four runners – Masai, Ayalew, Belete and Teferi – and they went through 3km in 9:47.

During the last lap, Ayalew, Masai and Teferi surged away from Belete. With 16 minutes on the clock, Ayalew pushed the pace, pulling away from Teferi and Masai and continued to increase her gap in the final stages to seven seconds, romping home in 18:59.

Ayalew,23, emerged in 2012 when she set a 3000m steeplechase PB of 9:09.61 at the Diamond League meeting in Oslo and finished fifth at the Olympic Games in London. Last year she finished one place higher at the IAAF World Championships in Moscow.

“I dedicate my win to my husband who is a marathon runner,” said Ayalew, who began running at school in 2009 and quickly fell in love with the sport. “It was a hard race against strong rivals on a very tough course. I’m working to improve my personal best in the 3000m steeplechase next summer.”